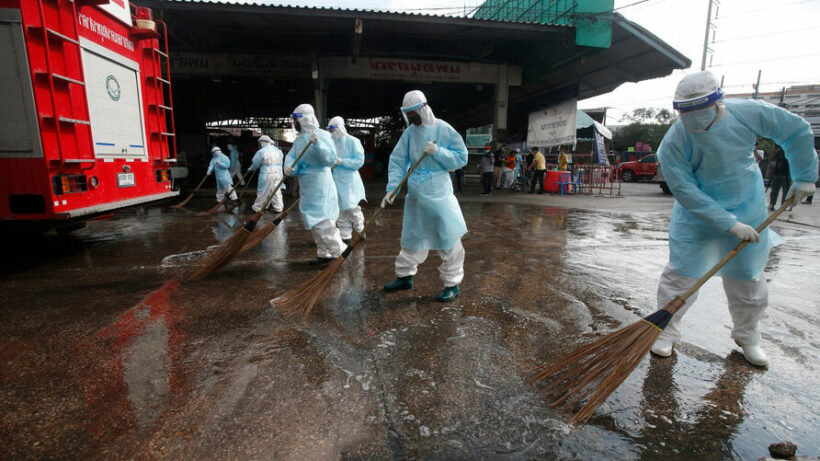 Today the Thai public health department has announced 21,882 new infections of the Coronavirus and 209 Covid-related deaths. 245 were detected in the Thai prison system. 21,106 patients have been released from hospitals and field hospitals.

210,943 patients are currently still under state care, 5,615 people are considered in a critical condition, whilst 1,172 patients are on artificial respiration – a figure which has been steadily rising over the past month.

Province totals will be published early this afternoon.

It took soldiers about 8 hours to reach the village due to rough terrain and poor weather.

Soldiers are also carrying out testing and to take care of Covid patients and troops are working with medical workers from Umphang Hospital. The virus is reported to have spread to 4 other villagers.

• The CCSA will decide today if they will extend the current lockdown measures. The extension of the Red Zones, with the highest levels of restrictions and curfews, have been ramped up over the past month but have seen a steady rise in both new infections and deaths, both in the key battle grounds around the city and nearby provinces, and the other provinces as well.

Yesterday Dr. Thaveesilp Visanuyothin said that the operations centre and the Department of Disease Control predict that Covid infections and deaths will increase over the next month.

“Without lockdown measures in place, the number of daily infections is expected to reach 60,000-70,000, with more than 800 fatalities every day.”

He also announced that the CCSA will discuss whether to ease some restrictions, and to allow some essential businesses to reopen on the premises of department stores, as requested by the Thai Shopping Centre Association.

• Today’s anti-government protests in Bangkok may cause disruption to traffic, especially around Ratchaprasong and Lat Prao intersections where rally organisers have announced major rallies. The Metropolitan Police Bureau is preparing to face off with protesters warning them that large gatherings of people are not permitted under the emergency decree.

Violence has broken out at recent city protests where police claim a smaller, breakaway group of protesters have set fire to police vehicles and defaced public property.

HolyCowCm
Well it is consistent.

AussieBob
Seems Thailand is in a holding pattern - lets hope it stays here and that 30K number never arrives.

Soidog
The case numbers are essentially flat as little to no active testing is taking place. The only tests are from people who are concerned or attend hospital for a test. As that whole system is up to capacity (It’s full),…
Rasputin
3 hours ago, AussieBob said: Seems Thailand is in a holding pattern - lets hope it stays here and that 30K number never arrives. And what do you think is going to stop it?  I can't see anything on the…

AussieBob
1 hour ago, Rasputin said: And what do you think is going to stop it?  I can't see anything on the horizon with the power to reverse the situation. Yep - unless they get a lot more people vaccinated a…