School hazing ceremonies are a part of Thai culture. At schools it can be as innocent as the Wai Khru ceremony where students prostrate themselves in front of their teachers to show respect, to the more colourful ceremonies devised by older students and lecturers at universities which have also drawn concern from sections of Thai society. It’s all part of showing deference, perhaps event subordination, to those older or higher rank than you. The incident posted over the weekend in Chonburi is just another example.

Netizens are raising concerns over the health, safety and wellbeing of new students at the Suankularb Wittayalai Chonburi School, after they were told to kiss the ground during a welcoming ceremony.

They were mostly expressing concern that students could be infected by potentially lethal bacteria.

The Anti Sotus Facebook Fanpage has exposed what it called an “improper freshmen welcoming activity” at Suankularb Wittayalai Chon Buri School (east of Bangkok). The page posted photos of new students with their mouths pressed directly to dirt on the ground in the school’s football field, after being ordered to do so by senior students.

The photos sparked a social media discussion about the appropriateness of the activity and the potential health consequences for the new students from kissing the ground.

Direct exposure to dirt could cause melioidosis disease from the infection of burkholderia pseudomallei bacteria in the soil, said Dr Siriluck Anunnatsiri, a medical researcher at Khon Kaen University’s Melioidosis Research Centre.

She said the symptoms and seriousness of the disease varied for each patient based on the body’s ability to fight infections. The disease can be deadly and has a 60 per cent death rate if the infection makes it into the bloodstream.

After the “kissing the ground” activity went viral, many current and former students of Suankularb Wittayalai Chon Buri School leapt to the defence of their school. They said the ceremony was arranged under teacher supervision and that new students were not forced into activities or intimidated by the senior students.

Following the adverse publicity, school principle Wanchai Tansamai said he had summoned the teachers and senior students responsible to discuss how the ceremony could be improved.

“The school does not ignore public concerns over the inappropriateness of the ground-kissing activity, and we will make sure that such activities will not happen again,” Wanchai said.

“The school also acknowledges that the senior students had good intentions in arranging the welcoming ceremony for the new students in order to let the newcomers love their new school, adjust to the new environment and make friends more easily. They did not intend to cause any harm to the new students at all.”

He also said he had concluded from the accounts of senior students and teachers that the ground-kissing activity was at the end of the ceremony and not included in the original schedule.

The senior students at the event impulsively asked the new students to pledge their love to the school by kissing the ground, he said.

Siriluck said Thailand was the world’s hotspot for this kind of sickness, as every year around 2,000 – 3,000 Thai people fall sick with it, higher than any other country.

“This disease can be commonly found among farmers or people, who work outdoor, in every region of Thailand, while the northeastern region, especially in Khon Kaen, had the highest prevalence of Melioidosis cases,” she said.

“Melioidosis can be fatal but it is very easy to prevent by avoiding the skin’s direct contact with soil, wearing boots and gloves when working with soil, and always washing hands and body afterwards.” 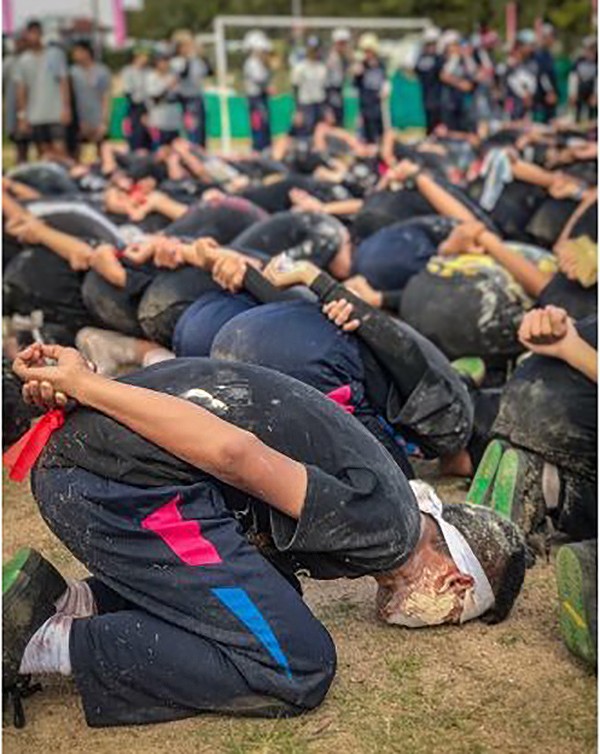