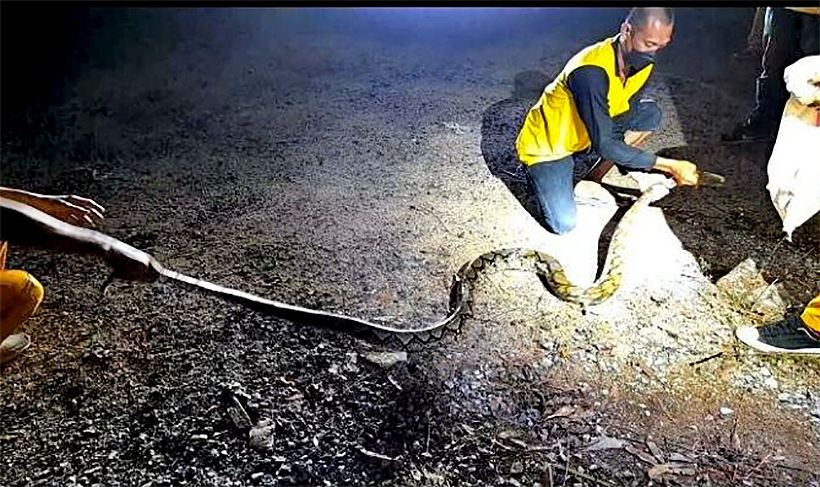 A farmer in Ban Beung district of Chon Buri province says he walked in on a huge python in his chicken coop yesterday. The farmer called rescue workers to get the snake out of the coop, and they took five minutes to force the snake into a sack. The farmer said one of his chickens had been missing, and he assumes the python ate it.

The Pattaya News reports the python was five metres long. TPN notes the farmer was “spooked”. Animal control officers say they will release the snake into an isolated forest away from people, but they won’t harm it. The snake is reportedly five metres long, over 16 ft. The farmer, whose name wasn’t reported, lives in the Bueng sub-district of Ban Beung.

Another animal locals have spotted in Chon Buri recently is an ‘albino’ monkey, which is said to have a twin. Locals call them ‘albino’ monkeys because of their white faces. Locals said it had been a while since they last saw the twin monkeys, before one was spotted on a mountain in the Saensuk district. They said the monkey must have come back down the mountain because it got too hot in the high spot where it usually lives. They said the monkey was probably looking for food.

HolyCowCm
Not exactly huge. Is about a 1/4 of the size of a couple that had been in my old home yard before and the onetime one that was just slithering into the canal klong during Loy Krathong just after we…
Smiler
You have seen pythons that were 20 meters in length ?? my friend the maximum size for a reticulated python was 33 feet, but unlikely if any would be found that size today, 5 meters is a good size it’s…