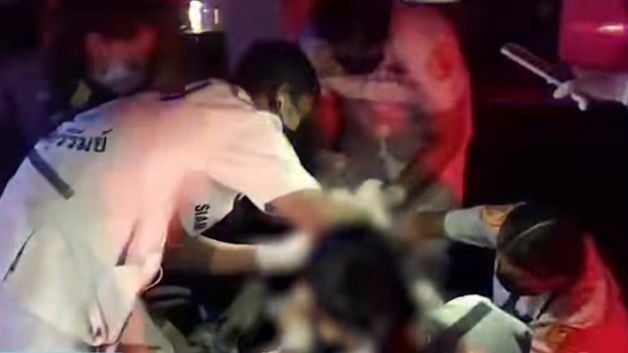 A 50 man fight broke out in the middle of the street at 1am this morning after the annual Red Cross music festival held in the northeastern province of Buriram. Two groups of young men, approximately 50 in total, started out by arguing and chasing each other on motorcycles and then began throwing glass bottles, homemade grenades and shooting guns at each other.

Broken glass, gun casings and fragments of homemade explosives were strewn across the Nang Rong – Lam Plai Mat road in Buriram province after the 50 man fight that occurred in the early hours of this morning, causing locals to find shelter on both sides of the road. Villagers reported that the youngsters dispersed after loud gunshots were fired.

Locals posted a clip of the fight on social media with the caption, “is this a road or a battlefield?”

Kak and Suchart, who live near the scene of the incident, said the men had attended the annual Red Cross music festival held from March 16 to 22. They explained that fights break out after the event almost every year, causing injuries and sometimes death. While officers maintain order within the event itself, once people come outside they fight on their way home, said Kak and Suchart. It is dangerous and annoying for villagers, they added.

While no injuries have been reported to the police, the Siam Rescue Unit was called in to help injured people, including one young man who had his teeth knocked out and another who suffered head wounds.

Security guards at the Red Cross music festival seized a number of weapons during entry searches, including knives and homemade bombs.

If anyone was affected by the incident, police ask them to report it at Nang Rong Police Station so they can investigate further.

Graham
And the BIB were where ? Probably sleeping in the local station. 555

Poolie
12 minutes ago, Graham said: And the BIB were where ? Probably sleeping in the local station. 555 Probably in the local station, in small numbers, it being around 2am, but dont let that stop you Thai bashing. 555
Prosaap
It happen every year even thai can think a little and plan ahead oooh they can not