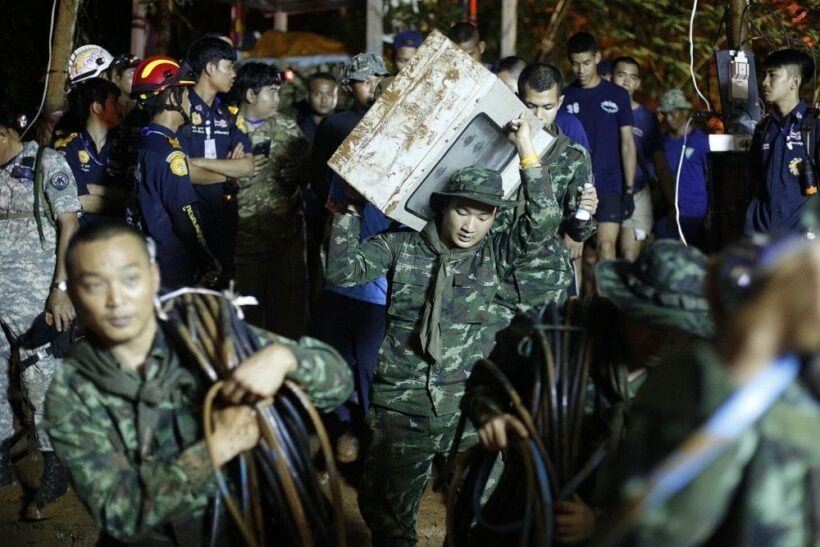 International experts have arrived in the last 24 hours to add to the level of expertise as every effort continues to be made to rescue 12 young footballers and their deputy coach trapped for five nights in the Tham Luang Cave in Chiang Rai province.

Three cave-diving experts from the UK arrived on the scene yesterday to help locate the teens, who are players of the local Mu Pa Academy football club. The team entered the country’s fourth-longest cave in Mae Sai district on Saturday with their 25 year old deputy coach, Ekkapon Intawongse. According to early reports they had basic provisions and a first aid kit. This was not the first time they had gone to the cave.

It is believed that they may have failed to leave the cave before a flash flood arrived, inundating a huge part of the cave.

The three foreign experts – Robert Harper, John Volamthen and Richard Stanton – arrived in Chiang Rai on Tuesday evening. The British cave-divers, who have previously explored the site, arrived on June 27 to join about 1,000 Thai soldiers, navy SEAL divers, police and park rangers at the mud-slicked site in the northern province of Chiang Rai.

Thai Airways International sponsored the travel of the experienced underwater cave rescuers, who boarded a flight out of London on Tuesday night.

“We have already talked to them online about the nature of the challenges,” said Chiang Rai Governor Narongsak Osottanakorn.

At present, a total of 12 rescue teams are in action, using a variety of approaches in the hope of saving the missing youths. Efforts were on yesterday to find an accessible hole from the top of the cave, to enter the deeper reaches that rescue teams have not been able to from the main entrance.

Meanwhile, the US-Indo Pacific Command has dispatched a team of Navy officers and disaster experts to assist with the operation. Weerasak said that the US would also arrange for the dispatch of equipment required for the rescue from Okinawa.

Yesterday, the main difficulty confronting divers led by the Navy’s SEAL unit was the increasing water level in the cave following continuous rains. The divers have had to swim through muddy waters in the cave that is full of stalagmites and stalactites.

Yesterday, the SEALs, tried to reach “Pattaya Beach” in the cave where it is believed the youths may have taken refuge. The Army has deployed more than 1,000 personnel to survey waterways and to build blockages in an attempt to decrease the flow of water into the cave. Yesterday they erected check dams to divert water from the Pa Mee Cliff from travelling into the cave system.

Local people in the area expressed readiness to let their houses be flooded as a result of water being pumped out of the cave, saying they were willing to cooperate in the efforts to find the youths.

Interior Minister General Anupong Paochinda added that hundreds of local, military and rescue officers have been deployed for the search operation. Anupong, however, warned that it was a race against time as rainwater was flooding the limestone caves despite water being pumped out. He said larger water pumps could not be taken into the cave because of the narrow entrance. Heavy fog also surrounded the cave, preventing helicopters from flying above. 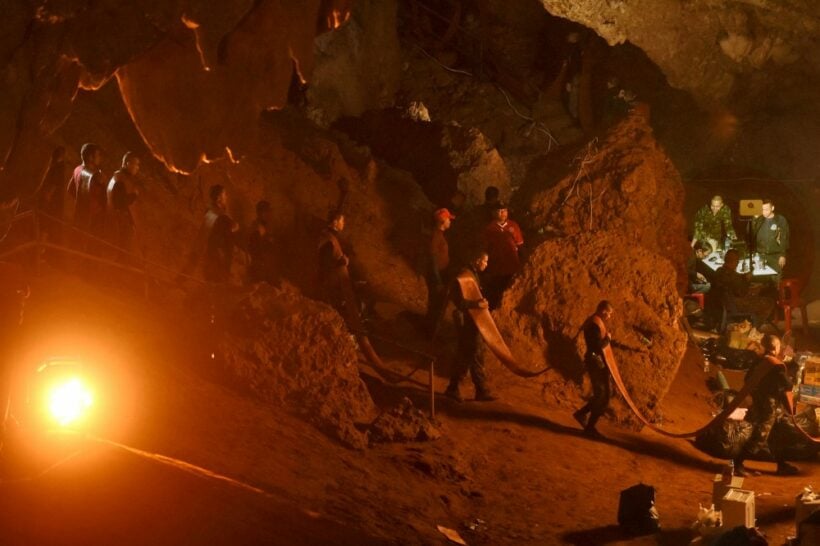 Rescuers spent all of Tuesday laying electric wires underwater to enable five water pumps to function. Some pumps also were placed outside to decrease the water level around the cave. He believed, however, that the missing people would not have gone too far from the entrance to evade the flood and they should have their flashlights with them.

“With varying depth and the lack of light, even divers with oxygen tanks are having a hard time exploring the cave at some points. In order to dive efficiently, they need some air between the water surface and the cave ceiling,” the minister said.

“More search crews will be deployed in addition to the divers. There should be those rappelling down from a nearby cliff and drills should work their way down through some cavities,” he said.

The Energy Ministry will supply the drills while the Natural Resources and Environment Ministry would supply X-ray machines to help scan the cave, he said.

HM King Maha Vajiralongkorn said, through his royal spokesperson, that the search operation should be carried out in the best possible way in the interests of the missing persons, their families and also the rescuers, PMGeneral Prayut Chan-o-cha said yesterday.

“His Majesty is closely following the situation.”

An operation command has been set up to integrate the search force, the premier said. Headed by the provincial governor, the command would consist of the police, the military and civil officers and work on the rescue, media centre, housing for the victims’ families and food supply

“They are sportsmen. I’m certain they are tough enough to survive and wait for the rescue,” the PM said. 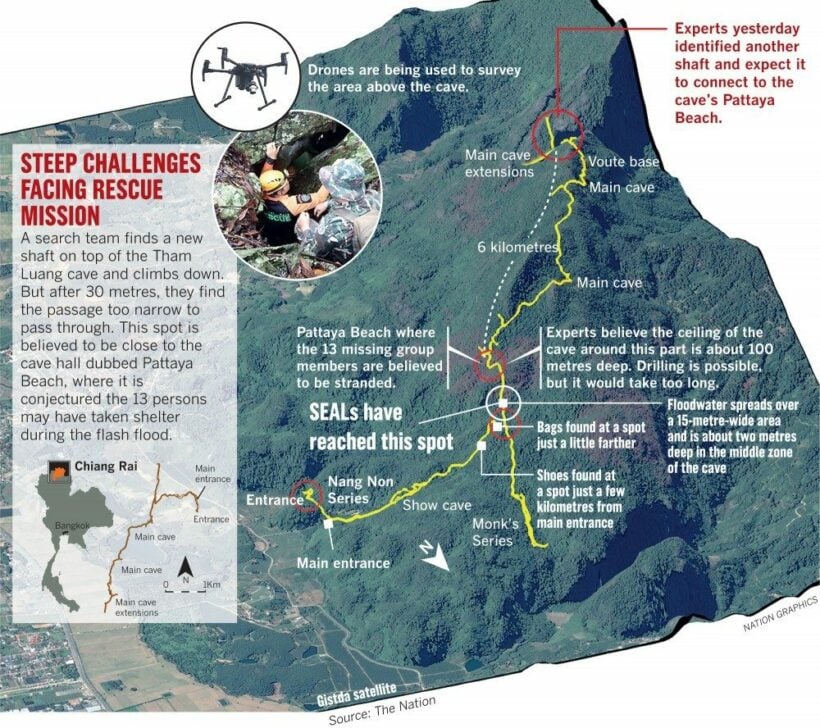 US teacher, accused of student rape in 1982, extradited from Thailand after 36 years on the run