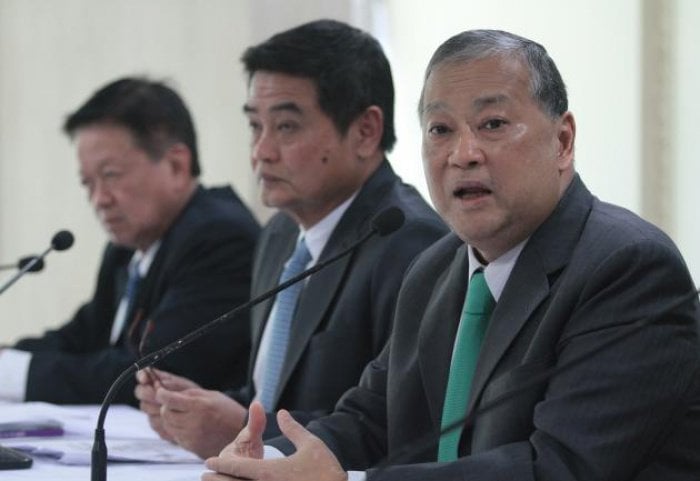 PHUKET: Fuming from the public and social media griping over the flash flood that paralysed much of the capital on Tuesday, Bangkok Governor Sukhumbhand Paribatra yesterday confessed to failing to take precautionary measures like draining the sewers.

“I admit to the mistake, but heavy rain on this scale was beyond imagination,” Gov Sukhumbhand told a press conference at City Hall.

From now on the Bangkok Metropolitan Administration (BMA) would be fully prepared to deal with off-season rain using other measures.

Thundershowers in the afternoon inundated many business districts such as Rama IX, Sukhumvit and Asoke. Rainwater in some areas of Huai Khwang district was supposed to be quickly removed through BMA’s expensive set of giant subterranean tunnels.

Spending hours in traffic jams got commuters angry and they posted blistering attacks against the governor on social networks.

“You can blame me for not warning about the flood, for not being able to save a flooded supermarket, but do not criticise BMA officials.

“Although we miscalculated the situation, we were able to fix it promptly. And if all these are mistakes, I admit it, but no one can make it rain hard or little.

“And no one can guarantee that the heavy flooding will never be repeated, after rain had surged exceedingly,” he said.

A reporter’s question on whether the same flooding scenario could be expected left Sukhumbhand exasperated.

“I am not an angle who can predict that. I would be willing to answer that if I were one.”

In a lengthy defence of the administration, he said Bangkok was a water city, a rainy city.

“It’s not possible for there to be no flood-risk spots in the capital. You need to live on a hill to be worry-free about flooding.”

The BMA cannot conduct flood-prevention measures or clear waterways in many privately-owned areas.

The private sector was asked to cooperate with the BMA in performing anti-flood operations, while the public was asked not to worry about flooding.

The BMA had collaborated on the problem with the government and would continue doing so for the long run.

“In the coming wet season, the BMA will work closely with the government,” he added.

Prime Minister Gen Prayut Chan-o-cha blew a fuse over the flash flood, saying he had warned two weeks ago that a tropical storm was coming that would bring heavy rainfall.

He said he would find out which agencies would be held responsible.

He was also checking with the BMA to determine why the drainage had not gone smoothly, noting that it was the culture of government agencies to perform their duties passively.

The National Council for Peace and Order will look at the issue as a whole to see how to prevent flooding completely in the future.

Residents in the North should watch out for rain and floods in the next few days when the tropical storm moves in their direction, he added.

Gov Sukhumbhand’s spokesman Wasan Meewong asked the public and cyber citizens to consume news about flooding and causes of flooding rationally, not emotionally.

“Flood photos are posted and distributed widely during inundations, but not post-flood photos,” he said.

The drainage capacity in the capital was 60 millimeters per hour. Any downpour beyond that would trigger a flash flood.

“To solve the problem drastically, underground sewer pipes need to be replaced with larger sizes,” he added.