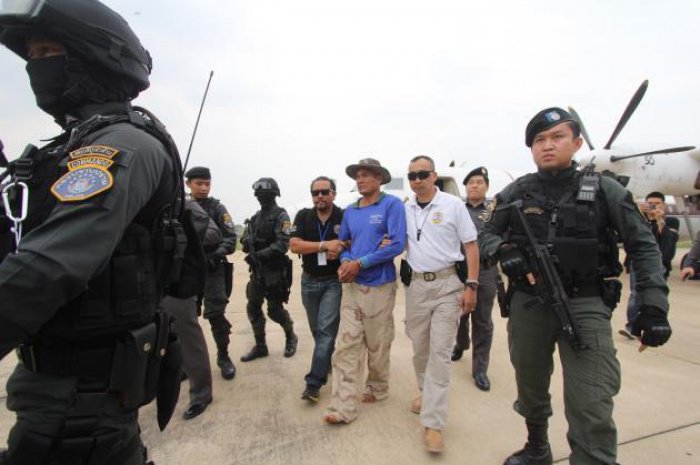 PHUKET: Police have arrested a janitor who allegedly was hired to kill the revered monk from Udon Thani who was found shot dead this month. They also named a junior policeman as an accomplice on the run.

Police told a press conference yesterday that a man wanted Phra Bundit Supanditto murdered because one of his wives had left him to practice dharma at Pa Tor Seesiad Temple, where the victim was the abbot.

Panja Chareesaen, 49, was arrested on Tuesday evening in Kalasin and flown to Bangkok for the press conference.

He admitted to the media to shooting the monk for Bt50,000 and named Pol Snr Sgt Maj Charnchai Soisangwan as the driver who took him to gun down the victim.

Mr Panja also implicated a person as the mastermind, who has been identified by police as Bor.

Royal Thai Police chief Pol Gen Somyot Poompanmuang said later that Mr Panja was told by Mr Charnchai that the victim was a rogue monk who was having an illicit affair with the unnamed woman.

Gen Somyot said the evidence was now sufficient to secure an arrest warrant for the mastermind in a few days, but police were now unable to say whether there were other accomplices.

He said Mr Charnchai was a driver for Pol Maj Gen Bunlue Kongbangyang, an area police special operations commander who has been transferred away, but said both Gen Bunlue and Pol Maj Gen Chanyat Saithin, Udon Thani police chief, should not be viewed as co-suspects.

Police made the arrest of Mr Panja after Gen Bunlue and Gen Chanyat were transferred in the morning.

Mr Charnchai has been dismissed from the force and is possibly hiding in Laos, Gen Somyot said, before vowing to pursue him to find more possible accomplices.

He acknowledged interviewing Bor as a witness but said he would not be treated as a suspect until further evidence against him was available to police.

Police are working on two hypotheses – Bor directly contacted and hired Mr Charnchai or through other people as mediators, Gen Panya said.

Mr Charnchai was close to Mr Panja, who also works as a mechanic with knowledge about metal work, he said.

Police said at the press conference that the murder weapon was modified by Mr Panja – a shotgun capable of firing M16 rounds.

In a police-supervised re-enactment of his crimes at the scene near the temple in Muang district, Mr Panja put his shotgun on the roof of the passenger cab of a pickup truck driven by Mr Charnchai, aimed and opened fire at Phra Bundit – one shot while he was walking and one at his body after he fell down.

Before the re-enactment, Mr Panja apologized to the father of the victim, Luang Pu Suk, also a monk. “I was wrong,” reporters heard.