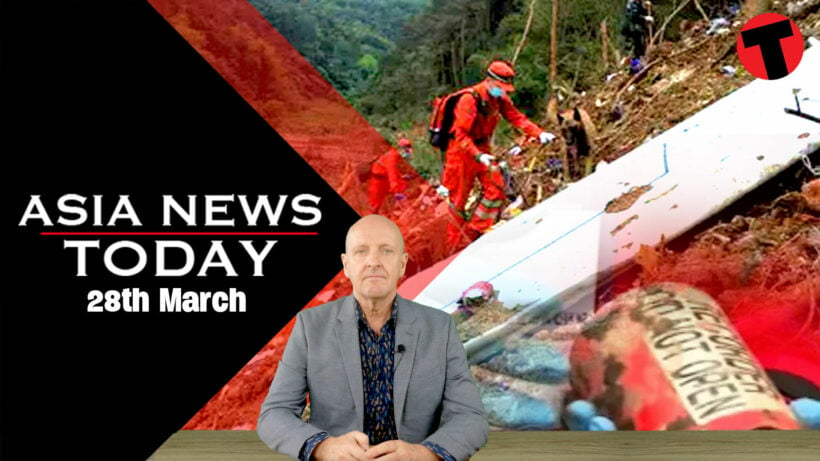 The latest from the crash site of the Boeing 737 in southern China, more threats from the Burmese Junta, one of the largest cities in the world heads into a Covid lockdown and vanishing glaciers in Indonesia, yes Indonesia.

Recovery crews at the site of the China Eastern Boeing 737 that crashed last Monday, have found the second black box recording device. This time it’s the flight data recorder after the cockpit voice recorder was found last Wednesday.

The China Eastern Airlines Boeing 737-800 jet crashed into a mountainside in southern China last Monday afternoon, plummeting from its cruising altitude and hitting the ground in a near vertical drop. Whatever happened was at about the time when the plane would have started its descent into Guangzhou.

Flight MU5735, with 132 people on board, was travelling from the southwestern city of Kunming to Guangzhou in China’s south. about the time when it should have started its landing descent.

Meanwhile, more than 10 kilometres from the main crash site, a Chinese farmer found what he suspects is a piece of the aircraft. The potential find indicates the challenges investigators face as they piece together answers as to why the six year old plane plunged from the skies.

According to the official rescue team, the piece found by the farmer is about 1.3 metres long and 10 centimetres wide. Investigating authorities are yet to confirm that the remote plane parts have anything to do with the China Eastern flight.

The plane was not one of the new, controversial, 737 Max jets, which nearly brought US plane manufacturer Boeing to its knees following two fatal incidents caused by faulty software called MCAS, the Maneuvering Characteristics Augmentation System.

Days after human rights groups published an extensive report accusing Myanmar’s junta chief of targeting unarmed protestors with a special hit squad of snipers, the Burmese chief vowed over the weekend to “annihilate” opponents of the junta.

Saturday was the anniversary of Myanmar’s most violent crackdown on pro-democracy protests. The army chief says the Burmese military will “no longer negotiate… and annihilate until the end” groups fighting to end its rule.

The violent crackdown, one year ago, killed 163 protesters, according to a local monitoring group. The protestors had been demonstrating against the junta ousting Aung San Suu Kyi’s government in the February 2021 coup. Since the coup, authorities in Myanmar have killed over 1,700 people, according to international monitors.

This week, two human rights bodies accused the Junta chief of creating a special squad that deployed snipers to kill unarmed protestors. The researchers investigated leaked documents and 128 testimonies from survivors, medical workers, witnesses and former military and police personnel, on violence in Myanmar. The report was titled “Nowhere is Safe”.

Shanghai, China’s most populous city, is launching a phased lockdown to mitigate the Omicron-fuelled Covid-19 outbreak that has hit China with its highest caseloads since the early days of the pandemic.

Shanghai will lock down its eastern half this week followed by a similar lockdown of the western side of the city starting this Friday.

The metropolis of 25 million people has become the leading hotspot in the Chinese outbreak that began to spread earlier this month.

A record 3,450 symptomatic cases were reported in Shanghai yesterday, accounting for nearly 70% of the nationwide total. 50 of the newly infected were regarded as symptomatic and requiring treatment.

Although the infection numbers remain insignificant when compared to other major countries, the cases are China’s highest since the first weeks of the pandemic, which initially emerged in the city of Wuhan late in 2019.

Millions of residents in affected areas across China have now been subjected to citywide lockdowns.

Something we don’t hear much about…. Glaciers in Indonesia. Well, another victim of global climate change where it appears that Indonesia’s little-known glacier could disappear as early as over the next 3 years, according to the Meteorological, Climatology, and Geophysics Agency of Indonesia warning that rising temperatures are accelerating the melting of the ice.

The tropical glacier, one of a handful left in the world, lies on a mountain near Puncak Jaya in Indonesia’s easternmost province of Papua. It has undergone a rapid loss of ice coverage and thickness over the past two decades and now is expected to see snow completely disappear from the mountains in just a few years.

The Papuan glacier is one of the few remaining tropical glaciers, with others located in South America and Africa.

The Philippine Coast Guard has reported another “close distance maneuvering” incident by a vessel from the China Coast Guard during a patrol in the West Philippine Sea on March 2.

The Philippine Coast Guard says the incident occurred while one of its ships, the BRP Malabrigo was patrolling the area of Scarborough Shoal, locally known in the Philippines Panatag Shoal.

The Chinese cast guard ship is alleged to have conducted “close distance maneuvering, as close as 20 metres to the Filipino vessel, saying the manoeuvre was a violation of the 1972 International Regulations for Preventing Collisions at Sea.

According to the Filipino coast guard, this was the fourth such incident involving coast guard ships in the disputed area, over the past year.

It’s unclear whether the Philippines has so far lodged an official diplomatic protest over the incident.

China, which has sweeping claims in nearly all of the West Philippine Sea, claimed control of the disputed shoal in 2012, prompting the Philippines to seek international arbitration.

In 2016, the Permanent Court of Arbitration in The Hague invalidated China’s sweeping claims. But China continues to disregard the ruling.

Cherry blossoms have reached full bloom in Tokyo and the Fukuoka Prefecture.

The blossoms of the Somei-Yoshino species have come to full bloom — the first to do so in Japan this season, about five days later than last year.

Municipalities that operate large parks well known for cherry blossom-viewing are welcoming visitors but with Covid restrictions and social distancing in place. The annual blossoms are a major attraction for international visitors every year but Japanese tourist authorities say that there has been a limited response for foreign travel to see the blossoms this year.