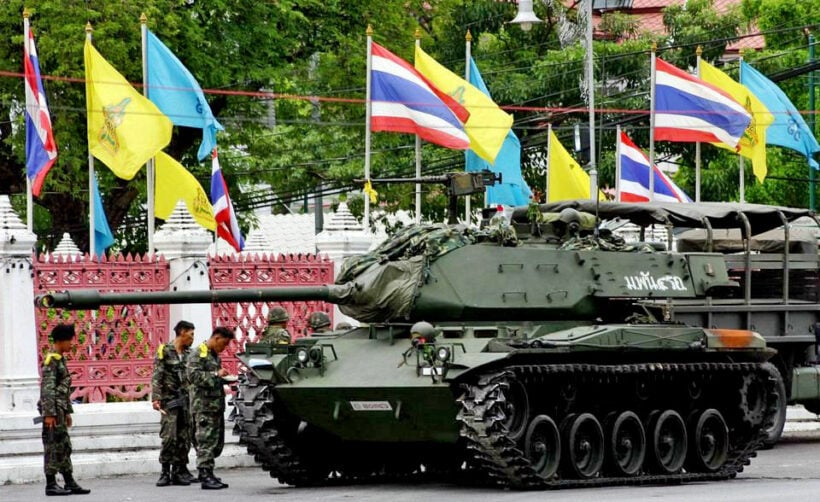 The army is recognising that, with the effects of the Covid-19 pandemic, they shouldn’t be spending massive money to obtain weapons from abroad. Instead, they will look for domestic sourcing for the weapons they purchase and spend on maintaining what they have already.

The chief of staff for the army acknowledged that the Thai military is reconsidering its spending since much of the budget this year went to efforts to contain Covid-19 spread. For the coming fiscal year, the army budget decreased 8 billion baht to 97.8 billion, falling short of the 112 billion that had been requested for funding.

New plans for the spending budget calls for cancellation or at least reduction of high-priced weapon purchases from abroad and will instead focus on purchasing local products. The army will prioritise equipment and weapons maintenance in order to prolong the life of what they already possesses and avoid having to buy new equipment.

The army has a 3 year development plan that launched one year ago and is active until October of 2023 and the chief of staff discussed the army’s performance and spending at the close of the 2021 fiscal year September 30. He said that the army spent a year attempting to continue security, peace, and order in Thailand and abroad while working to minimize damage from the continuing global pandemic and natural disasters such as the flooding that has rocked Thailand in recent weeks.

The army diverted militaristic spending in order to support pandemic control efforts and also to try to stimulate the ailing economy suffering from the Covid-19 pandemic. They say, going forward, spending will prioritise equipment maintenance to prolong its life as well as the welfare of army personnel.

Measures are also being enacted to support junior officers in order to advance their military careers as well as protect them from unfair treatment. The army will also attempt to lure more civilians into volunteer service in place of military personnel.

The navy and air force have also delayed purchasing and focused on maintenance of the equipment they already have after a reduction of funding to divert money to Covid-19 relief. The air force is decommissioning several F-16 ADF aircraft and merging two squadrons together, while the navy has reportedly put a hold on the purchase of any new vessels following backlash over plans to spend 22.5 billion baht on a submarine.

Lowseasonlover
Maintenance is not on the agenda in Thailand

gummy
1 minute ago, Lowseasonlover said: They could stop that stupid conscription that would save a fortune  Then how would the hundreds of Generals get their laundry cleaned, grass cut, houses cleaned and maybe promiscuous daughters serviced ?

Hamosity
9 hours ago, EdwardV said: Can’t think of this as anything but a PR stunt. I guess you could put off major purchases for a couple of years to give the appearance of legitimacy. Or Thailand can invest billions and…

dmacarelli
How about slacking the army budget in half? What are they doing with all that money anyway? What purpose do they serve? They should have been used to protect the borders for the past 21 months. Would have given them…

Vaccination of over 5 million school students gets underway