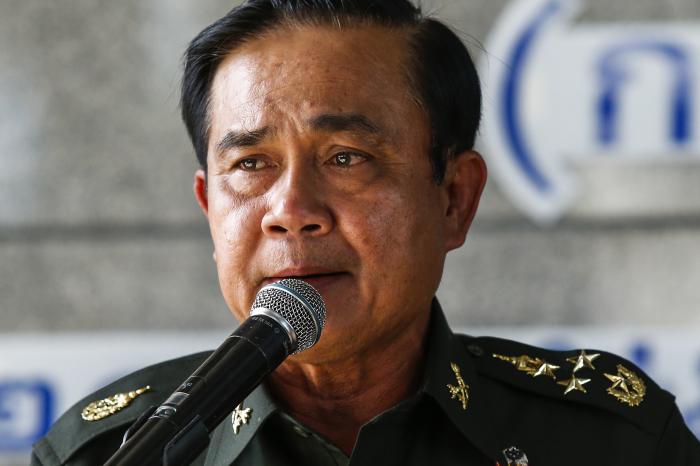 PHUKET: With martial law in place, Army chief General Prayuth Chan-ocha intends to bring together all stakeholders in the political conflict to break the deadlock, as he says the country cannot continue in the crisis any longer.

Gen Prayuth imposed the strict law after senators failed to find a way to appoint a neutral prime minister to end the political crisis, and the military detected the possibility of the warring parties engaging in violence, a source said.

“May I beg all Thai people to take off all ‘coloured’ shirts. We begin from square one to take the country forward to calm, peace and order. We have to look forward to the future and how we can move on,” Gen Prayuth told a press conference yesterday.

The caretaker government and its red-shirt supporters want to have an early election to facilitate their return to power, while the protesters and senators are looking for an unelected “neutral” premier to form an interim government to carry out their “reform” agenda that would somehow remove the Thaksin Shinawatra camp from politics.

Gen Prayuth clarified while declaring martial law early yesterday that it was not tantamount to a coup and people should not be concerned.

Acting PM Niwattumrong dismissed rumours that he was planning to suspend Prayuth as Army chief, adding that he would meet the top brass this week.

The military is seeking to restore order and is asking political groups to halt their protests, he said. He also urged the public to continue their lives as usual.

Asked if he had informed the government about the declaration of martial law, Gen Prayuth said: “Where is the government now? I don’t know. Let them do their work. They should work, if they can work.

“But I don’t bother the government. Now, the civil servants and the military are working for the country. I don’t care about the others,” he said.

Gen Prayuth said life would continue as usual. “We’ll try not to impinge on rights too much,” he said. “We will not create trouble for the people. Many articles [in martial law] have not been enforced yet.”

The caretaker government, meanwhile, called Cabinet members to a meeting at SC Park Hotel in the Rama IX area to evaluate the situation after the declaration of martial law, PM’s secretary-general Suranand Vejjajiva said.

Reacting to the military move, Acting PM Niwattumrong issued a statement saying it should be binding on all equally and peacefully under the rule of law and the Constitution.

Asked if there would be an early election, Gen Prayuth pretended he had not heard the question, but later joked: “Perhaps I need to consult an ear doctor.”

Gen Prayuth called a meeting of heads of state agencies, including permanent secretaries and directors of ministries, representatives of independent organisations, professional associations and civic groups to explain his plan after announcing martial law.

The military’s Peace and Order Maintaining Command was set up under the martial law, replacing the government’s Centre for the Administration of Peace and Order (CAPO). The military took over all security operations and other agencies, mainly police who worked to keep order in the capital, returned to their posts and offices.

Troops were seen guarding many key locations and media offices, while some media outlets were forced to close to stop provocative messages.

Gen Prayuth specifically told the chief of the Department of Special Investigation, Tarit Pengdith: “Stop. Enough. If you want to sue anybody, sue me instead,” a source in the meeting quoted the commander as saying, referring to Mr Tarit’s role over the past months in trying to bring protest leaders to justice.

Business groups hail army move if there is no coup