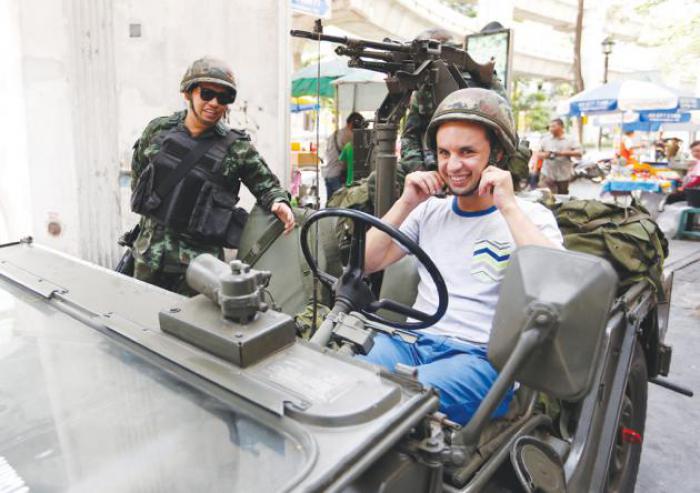 PHUKET: Tourists may start avoiding Thailand in droves now that the military has declared martial law, as many countries have issued advisories warning their citizens about the political crisis here.

Travel and related associations yesterday met with tourism authorities to hash out some measures to deal with the expected negative impact on the entire tourism industry.

Martial law was declared early yesterday. The military stated that it intended to preserve law and order more efficiently after the crisis dragged on for months without any solution in sight.

Chidchai Sakonbadi, vice president of the Association of Thai Travel Agents (ATTA), said the tourism industry had been in decline now for more than six months since the political conflict flared up. More than 50 countries have issued travel warnings, mostly advising their citizens to avoid travelling in protest areas.

“I expect that we may not attract a lot of tourists now because of this martial law,” he said.

According to the Department of Tourism, the number of visitors to the country may fall by 5 per cent this year, the biggest drop since 2009. In the first four months, arrivals were down by 4.9 per cent from a year earlier, to 8.62 million.

Mario Hardy, chief operations officer at Pacific Asia Travel Association in Bangkok, warned that the announcement of martial law would not be good for Bangkok tourism.

ATTA, for its part, urged the military to repeal the law as soon as possible to regain tourists’ confidence, especially from short-haul markets.

ATTA members are advising tourists who arrive in the Kingdom to adjust their schedules and head to places other than Bangkok, such as Chiang Mai, Phuket or Samui. The association is also working with travel associations in the provinces to come up with strategies.

James Ramage, group managing director for sales and marketing at one of the giant inbound operators, Diethelm Travel Group, yesterday advised all visitors to Bangkok to avoid protest sites and surrounding areas, political rallies and marches, as previously communicated.

However, beach resorts and other destinations within Thailand have not been affected by the political situation and the airports and other transportation systems are running as normal.