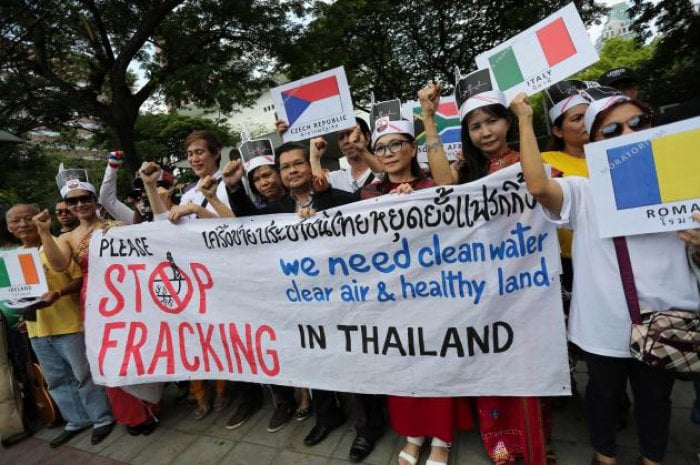 Anti-fracking protesters rally at US Embassy
The Nation / Phuket Gazette

PHUKET: About 20 members of the ‘Stop Fracking Thailand Network’ rallied outside the US Embassy in Bangkok yesterday to protest against chemical fracking in this country.

Two network representatives, Rangsit University professor Dr Smith Tungkasmit and Pipat Samanchuen, were allowed to enter the premises to hand a letter to Eric Frater, first secretary of the economic section of the embassy.

The letter demanded that US authorities encourage an investigation into companies Apico (Khorat), Apico LLC, Hess Corporation, Chevron and CEC and stop them using the chemical hydraulic fracturing system.

The group also asked the embassy to pass the request on to the US Congress.

Chemical fracking is a petroleum drilling process that pumps a solution of water, sand and chemicals at high pressure underground to crack the rock layers and allow natural gas to flow out.

The network claimed this process would leave a huge amount of chemicals under the surface, which could contaminate the groundwater and weaken the bedrock – possibly causing an earthquake and releasing flammable methane gas into groundwater and the atmosphere.

“We are demanding that the US companies and also other companies that have concessions to drill for petroleum stop using the chemical fracking process.

“This is because we are concerned about the impact to health of the |people in local communities,” Smith said.

“Our observation of the Namoon site in Khon Kaen province found that a company used the toxic chemical zinc oxide, which is not shown in the environmental impact assessment report.

Packages of this chemical, which should be disposed of by a hazardous-waste-management company, were instead donated to a nearby school,” he said.

After handing in the letter, Smith said the embassy promised to investigate this matter and would discuss it with the US companies within seven days. He also stated that the embassy claimed it would take definite action against the companies if they were found guilty of lawbreaking.

Outside the embassy, members of the Stop Fracking Thailand Network displayed banners as police guarded the area.

There were some arguments between protesters and police but the campaign ended peacefully.

Apico has denied it used the fracking process at the Namoon site in Khon Kaen, and also that it had used zinc oxide in its operations there.

Pisutth Nilasinthop, public and community relations director of Apico (Khorat), said in an e-mail to The Nation late yesterday: “The government’s Department of Mineral Fuels confirmed no fracking at the DM-5 site [in Khon Kaen], and we also confirmed no zinc oxide on drilling operations at this site.”

On the issue of packages of zinc oxide found at a nearby school, the company explained that Waste Management Siam (WMS), a contractor to Apico, had used an improper bag to donate plastic bottles to the school and a recycler, but the company insisted it did not use zinc oxide in its operation.

The company gave assurance that the use of improper bags had been prohibited and measures were put in place so it could not happen in the future.