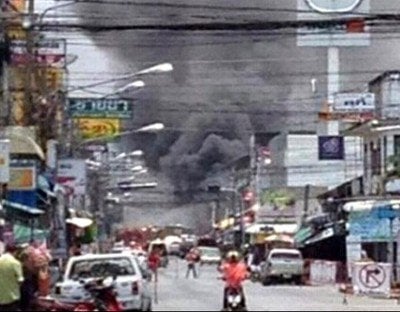 PHUKET: At least eight people are dead and 69 injured after three bombs exploded in a busy shopping district in Yala Town at 11:50am today.

Yala Governor Decharat Simsiri confirmed to the press that two explosions detonated near the Park View Hotel on the Ruammitr Road in Tambon Sateng of Muang district.

While firefighters were trying to contain the blaze, a third explosion erupted about 20 meters from the site of the first two blasts.

Cars and motorcycles parked on the street were set on fire by the explosions.and some buildings were set afire.

Maj Gen Peera Boonliang, commander of Yala Provincial Police, has ordered officers to check CCTV cameras in the area for any clues as to who the bombers are.

Witnesses reported a man parking a pickup truck at the nearby Jongluck Intersection followed by another two pickup trucks parking directly behind it.

Then two of the pickup trucks exploded, he reported.

A military truck was parked nearby.

At Yala Hospital at 1pm Yala Governor Decharat said the area is a popular shopping district for all local people, ethnic Chinese and Muslims alike.

The bomb may have been intended to target the many government officials in town to join the ceremonies being held to honor the birthday of King Rama I today.

While firefighters were dealing with the havoc in Yala Town a gas pipe exploded at the McDonald’s outlet at the Lee Gardens Plaza Hotel in downtown Haad Yai, Songkhla province at about 1pm. At last report firefighters were rushing to free about 200 people trapped in the building.

At 3:30pm, unconfirmed reports surfaced that two, possibly three, people trapped on the fourth floor of the hotel had died from smoke inhalation.