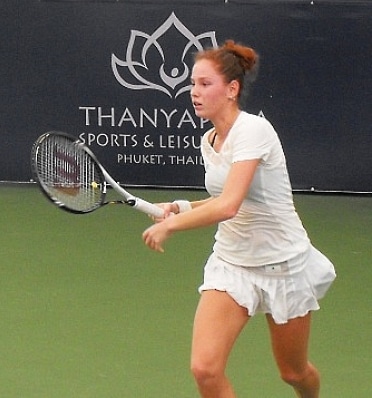 Played at Thanyapura Sports and Leisure Club (TSLC), an expectant crowd were treated to an enthralling finale of the US25,000 tournament watching Sirotkina of Russia fight back from 3-1 and 5-3 down in the first set, and from 5-1 down in the second set tie-break to clinch a deserved victory.

The straight sets win also avenged Sirotkina’s loss to Feuerstein in the quarter-final of the Bath US$25,000 UK event last March and was made even more sweet by the fact she celebrated her 21st birthday on Phuket last week

Speaking exclusively to the Gazette after the final, Sirotkina described her efforts as satisfactory.

“The conditions were tough out there today. It was very hot and humid. I thought the match was going to a third set so I concentrated on every point and changed tactics to not play over aggressively,” she said.

It was a successful fortnight for Sirotkina, who with her partner and compatriot Natela Dzalamidze, won the first women’s ITF doubles final played at TSLC last week.

“The semi-final was on my birthday and we won 6-0, 6-0 before beating the number one seeds [Chin-Wei Chan and Saisai Zheng] in the final. It’s been a great birthday for me,” a delighted Sirotkina added.

Having won an ITF US$25,000 tournament in Bangkok last June and now with two Phuket titles under her belt, Thailand has certainly become a good hunting ground for the Russian.

After losing the first singles final last weekend, Thailand’s Noppowan Lertcheewakarn joined up with Saisai Zheng to claim this week’s doubles title beating Xinyun Han and Sheng-Nan Sun 6-3, 6-3 in the final on Friday.

For more information on this story pick up copy of next week’s Gazette or visit Thanyapura.com

Phuket Earth Hour – “I will if you will’