As floods and torrential rain continue to plague northern Thailand, including neighbouring regions in Myanmar and Laos, 33 households in a mountainous village in Bo Klua district of the northernmost province of Nan have been ordered to immediately evacuate to a temple five kilometres away for fear that they might be struck by a landslide.

Bo Klua district chief officer Preecha Somchai ordered the immediate evacuation of the 33 households in Ban Huay Kharb, Tambon Dongphaya, after officials found a 200 metre crack on the mountain above the village.

He said that, if there is more rain, the crack on the mountain could result in another life-threatening landslide.

Seven villagers of the same family in Ban Huay Kharb were buried alive when landslide crashed onto their foothill house as they were asleep on Friday night following heavy rains. One person remains missing as search continues today to find their bodies. 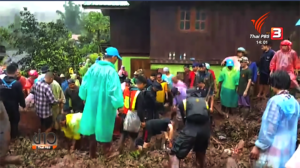