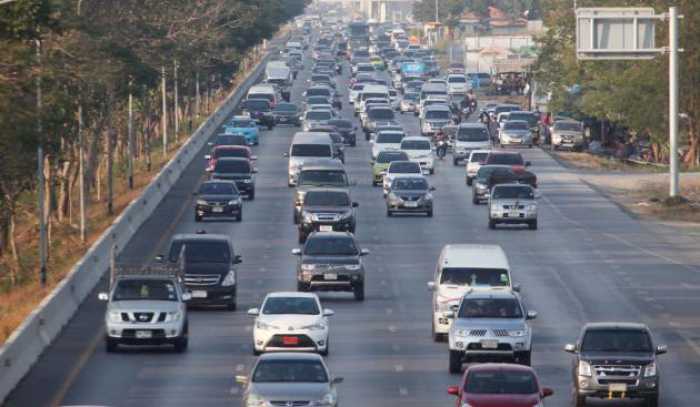 Officials manning 2,259 checkpoints arrested 84,345 motorists – about 25,800 of whom allegedly failed to wear motorcycle helmets and 24,797 others failed to present a driver’s licence, she said.

With drunk driving a major cause of accidents, the centre urged provinces strictly to enforce controls on the sale of alcohol, particularly to people under 20.

Drivers arrested for being drunk at checkpoints would be jailed – rather than fined – to discourage people from drinking and driving, she said.

A major accident took place in the southern province of Chumphon. A 13-year-old Thai boy and a worker from Myanmar were killed and eight others injured when a speeding pickup truck crashed into a group of Myanmar workers crossing the Asia 41 highway in Lamae district at midnight on Wednesday.

The injured driver, Thanandorn Saengchuany, 34, claimed the workers suddenly crossed the road and he could not stop in time.

The pickup hit one worker and crashed into a roadside tree. His nephew was thrown through the windshield and killed.

In related news, 1,977 houses were put under Bangkok police care while owners travel over the holiday period from December 20 to January 2, Metropolitan Police deputy commissioner Pol Maj-General Chanthawit Ramasut said. This figure is up from last year, when 890 houses were put on the police watch list.

“This year, police doing house patrols have also taken pictures and sent them to homeowners via Line – an approach that has received good feedback, with many replying with messages of thanks to police.”

He added that police fully performed their duty by checking all houses – whether listed as part of the project or not.