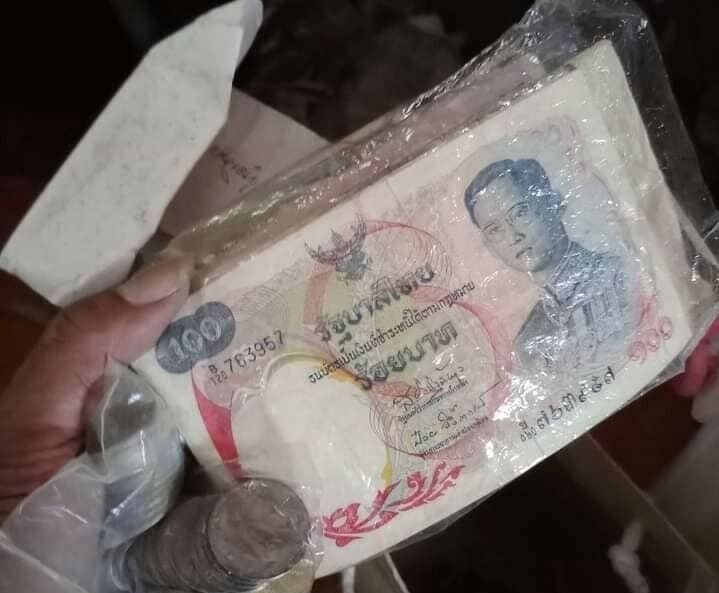 After 50 days of merit-making, Luang Phor Yen Satchitto’s minimalist hut was opened on Sunday by relatives who found over 10.6 million baht in cash under the bed. Relatives and locals estimate the figure should be nearer to 40 million and suspect a burglary has taken place, but forensic officers think otherwise. The cash was deposited into a joint account between the current acting abbot and three of the monk’s younger siblings. However, the district’s dean of monks said the monk’s relatives have no right to the money which should be vested in the temple in Prachin Buri province, east of Bangkok.

Despite the rule that monks are not allowed to own their own money, a total of 10,661,150 baht in cash was found inside the living quarters of Luang Phor Yen Satchitto, the abbot of Wat Pa Song Tham who passed away aged 81 on January 26 this year after 61 years of ordination.

Ekachai, a relative of the Luang Phor Yen, said the family made an agreement with the temple’s committee to keep the monk’s hut closed for 50 days of merit-making. On Sunday, relatives went to clear the hut and look for the abbot’s will when they found 5 million cash in an envelope, thought to be for the abbot’s life insurance, and another 5.6 million baht in old and new money. However, no will was found.

The abbot’s relatives and some villagers estimate that the monk, a popular fortune teller, would have closer to 40 million baht in his hut. They say the back of the hut has been tampered with and expect a burglary has taken place since the monk’s death almost two months ago.

Forensic officers have inspected the hut and say there are no signs of breaking and entering. A thick layer of dust suggests no one has entered the hut for at least one month, say the forensic officers.

The monk’s cash has been deposited into a bank account jointly owned by the current acting abbot of the temple and three of the monk’s younger siblings.

The district’s dean of monks said the relatives have no right to the money which should be vested in the temple. The law clearly states that if no will is found, any assets or money belonging to the monk must be given to the temple where the monk was ordained, says the dean. JamesR
On 3/23/2022 at 1:39 PM, Benroon said: Jesus - ok break down the ‘greed’ for us … who’s being greedy, by how much and how extravagant has this guy been with an amount that works out at a pittance per…

Benroon
21 hours ago, JamesR said: All of the people on this site who are saying how terrible the monk was and what a cheat he was, they know for sure it is true. How? They are also fortune tellers. 😆 Nope…
Fanta
On 3/24/2022 at 10:21 PM, AdvocatusDiaboli said: I can see where you made your financial mistake, …… so where did the 10 million other THB come from? Or according to the family … 40 million. News Forum - 10.8 million…
TWS60
On 3/23/2022 at 8:39 PM, Benroon said: Jesus - ok break down the ‘greed’ for us … who’s being greedy, by how much and how extravagant has this guy been with an amount that works out at a pittance per…