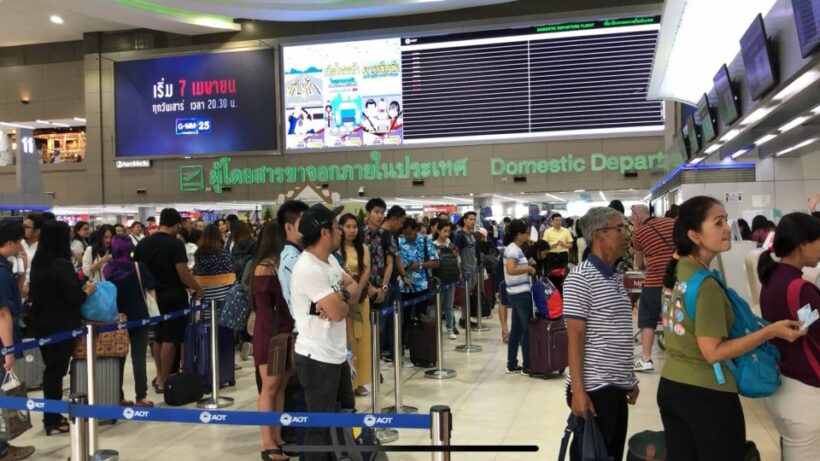 The country’s second largest airport, Don Muang International, is reporting a smooth operation despite the high volume of passengers for the Songkran holiday, heading out and arriving, in Bangkok.

Deputy Minister for Transport Pailin Chuchotetaworn has affirmed a full deck of immigration officials has been dispatched to the airport to facilitate outbound travelers.

“Despite a large volume of people arriving at Don Muang Airport’s departure terminal, most have been met with prompt assistance and service from beefed up airline staff who recommend that those not in need of help checking their baggage use provided automatic check-in kiosks.”

To address complaints over overpriced food, both Don Muang and Suvarnabhumi airports have provided passengers with pamphlets indicating where they can find differently priced foods.

Police have been sent to oversee traffic on Vipavadee Rangsit road heading into Don Muang Airport due to the closure of its entry bridge resulting in added congestion. Travelers are still recommended to travel to the airport 2-3 hours ahead of schedule to avoid any issues. A Skytrain service to the airport is still under construction but said to ready early next year.

Meanwhile, at Suvarnabhumi Airport, impressions from travelers have been mostly positive in spite of the large amount of people making their way through the terminal to their various destinations. Most noted their own pre-bookings as helping to facilitate departure.

The airport has organised free parking in Zone C of its parking building from 5PM today to April 17. Shuttle buses are available from the area to the main terminal.

Up to 193,400 people are estimated to make their way through Suvarnabhumi Airport daily between April 11 and 17, 10.4 percent more than last year. Flights have been increased to 1,040 per day, up by 11.2 percent, to speed up the processing of travelers.

Phuket Airport hasn’t reported any major problems with delays for outbound or inbound traffic at this stage.