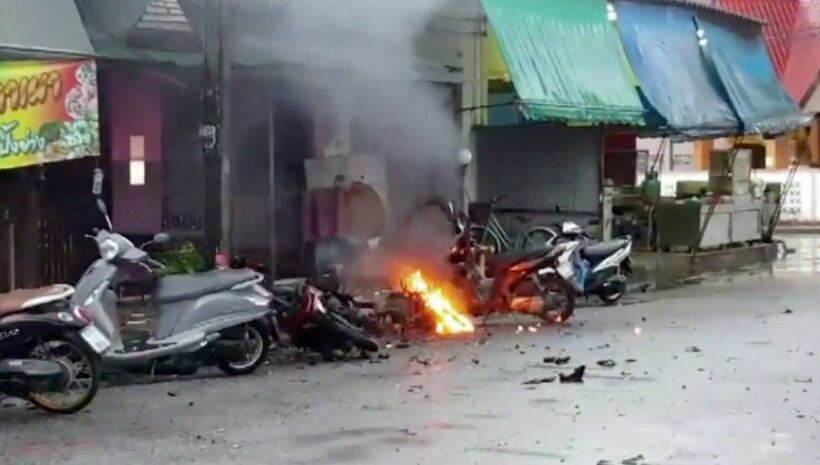 Army offices and local police are now hunting down six men for suspected involvement in last night’s attacks in Narathiwat.

The six men are suspected of being involved in bomb explosions at three residential areas in Sungai Golok district, injuring 13 people. (Sungai Golok is the last town in Thailand before you cross over the Malaysian border)

Police also note that today (April 10) is the founding day of the Barisan Revolusi National Congress separatist group so authorities say they are stepping up security in the wake of last night’s bombings.

Security officials have been checking CCTV to trace the movements of six men. The suspects are believed to have parked motorbikes with bombs at three locations in Sungai Golok.

The bombs detonated almost simultaneously after the three men parked the bikes then walked away. They can then be seen being picked up by others and fleeing the scene. Security officials say the men wore 20 baht convenience store raincoats to hide their clothes and faces. The 13 people injured in the attacks are reported to be in a stable condition.

In the wake of last night’s explosions several hotels have reported many cancelled bookings from tourists who were coming over the border to enjoy the Thai new year revelry. Sungai Golok also hosts an annual food festival during Songkran as well.