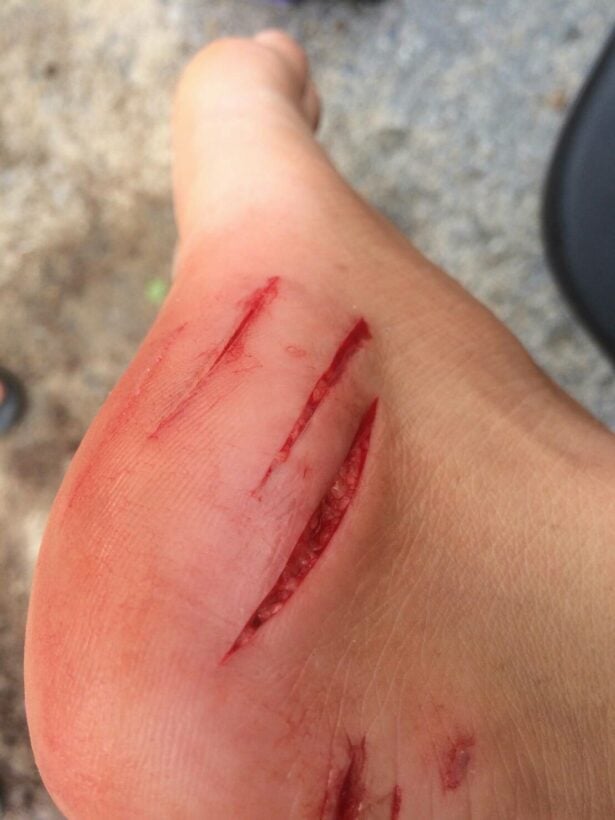 A 25-30 year old Japanese man was calling for help yesterday (Wednesday) after getting attacked by a mystery marine creature at Kamala Beach which left him with some severe, deep wounds.

Kamala police and locals in the area have surmised that the wounds seem to have resulted from sharp teeth, perhaps even a shark. The man suffered a deep wound on the left heel while there were 3 other marks on the side of his left foot. The rescue team gave him first aid before he volunteered to go to the hospital on his own. He refused to tell his name to rescuers or police.

He briefly explained that he was surfing in the sea before feeling some bites on his left foot. He shook his foot before reaching onshore to call for help.

The incident follows a similar episode which happened two years ago on Karon Beach when a Bull Shark was thought to be behind an attack on a tourist. The pictures of this man’s wounds have been sent to Bangkok specialists to investigate whether it could have been from a shark or not.

The Japanese man was later identified at Bangkok Hospital Phuket as Keita Koshigoe.

(We’ve posted a photo of the man’s wounds for the purpose of possible identification or information from a reader.)