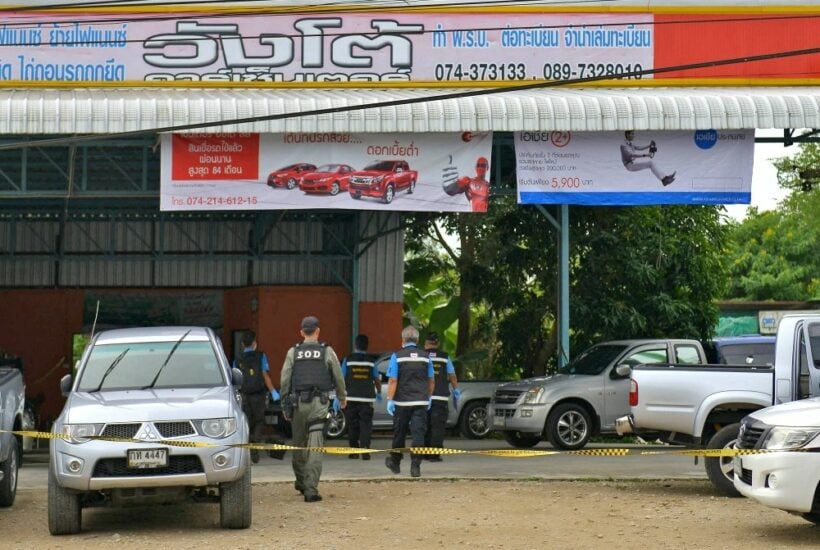 At least two people are dead after a daring robbery of five pick-up trucks in Songkhla yesterday which set off a dramatic series of events, including a hostage-taking, shootout, explosion and the safe disposal of a bomb. It started about 11am when a group of six or seven armed suspects raided the Wangto Car Centre in Tambon Na Thawi in Songkhla’s Na Thawi district and took four employees hostage.

Witnesses said the gun-wielding men in black arrived at the car centre in a Mazda BT-50 pickup truck. The four employees were rescued from Tambon Wang Yai, where they were reportedly taken to be killed.

Two of the workers managed to flee their captors, but the other two were shot and seriously injured. One of them, Saharat Laeni, succumbed to a gunshot wound and was pronounced dead in hospital late yesterday.

Security officers later retrieved at least three stolen trucks –- one of which was equipped with a bomb that was disarmed safely. Another truck exploded in Pattani’s Nong Chik district, some 70 kilometres away from Na Thawi.

It is believed that the trucks were stolen by insurgents to be used in future attacks in the deep South.

One Mitsubishi truck, with licence plate Bor Chor 7182 Yala, was found abandoned on the side of the road after it ran out of petrol.

Officers who chased another vehicle with licence plate Bor Thor 4063 Phatthalung, engaged in a gunfight at 2pm with an armed assailant who pulled over on Tambon Pak Bang in Thepa district. The suspect was killed

Inside this truck, security officers found a bomb attached to a cooking cylinder. The bomb squad was called and officers disarmed the explosive safely.

Another truck with the licence plate Kor Or 4995 Songkhla exploded and was found at 2.28pm on a bridge in Pattani’s Nong Chik district.

The objective and motivation of the robbery remained unclear, but security officials said the suspected attackers might be operative insurgents in the predominantly Muslim region.

The suspects were not identified. Srivara said one was reportedly shot dead by authorities and he confirmed that four vehicles had been recovered.

Authorities have been struggling to contain the violence that has erupted in the deep South provinces of Pattani, Yala and Narathiwat since 2004 claiming more than 6,800 lives. 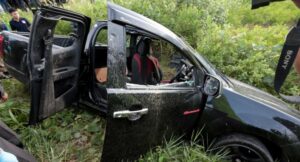 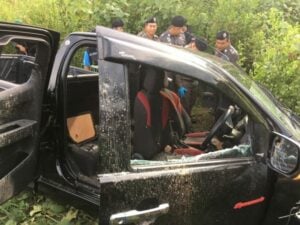 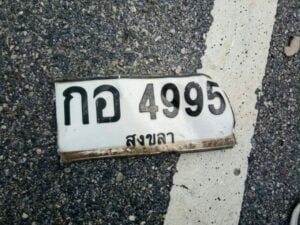 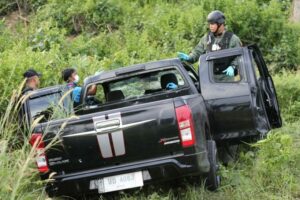 Air Asia under fire over racial discrimination at Don Mueang

Japanese man gets bitten by ‘something’ at Kamala