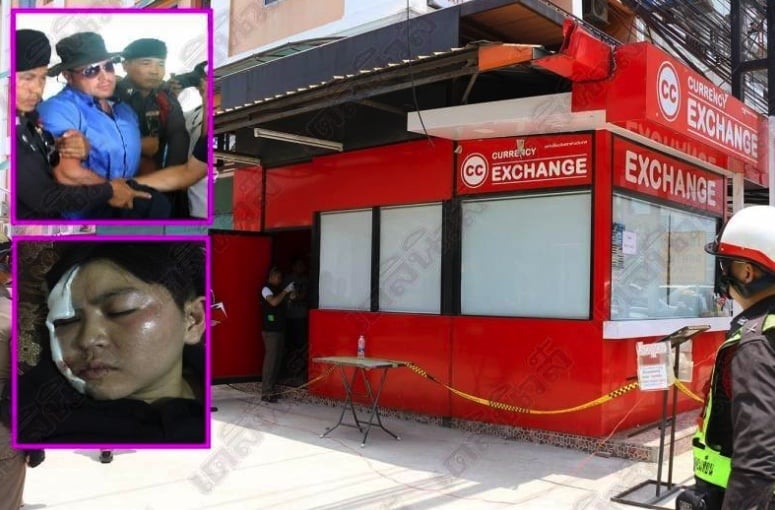 The Russian man accused of attacking a Thai woman at a Jomtiem exchange booth and making off with nearly 700,000 baht is denying his involvement in the robbery. This is despite the incident being caught on CCTV.

Earlier 30 year old Sunee Kaewyu was assaulted and robbed in a money exchange booth on Sukhumvit Road outside the Ambassador City Hotel in Jomtien, Pattaya.

Police caught up with the alleged thief within ten hours of the crime.

34 year old Nikolay Rybakov was arrested at Suvarnabhumi Airport while attempting to leave the country with his Russian wife on Saturday.

Pol Gen Chalermkiat Sriworakhan reported that the Russian “continues to deny everything despite overwhelming evidence”.

He was found in possession of a black bag from the robbery. He said the money – 670,320 baht’s worth of local and US currency – was his.

An associated motorcycle and car were found parked in the airport lot.

Pol Gen Chalermkiat said that the suspect was an ex military man who had come to Thailand a year ago and had failed to find work and seen his savings dwindle as a result.

He said he desperately needed money so that he could take it back to Russia to start over.

Investigations are continuing to see if his wife was an accomplice to the crime.

Meanwhile the owner of the booth, 33 year old Chatchaya Chaiyayongkoon, has presented flowers to the police as thanks for their quick work in the case.

She says that Sunee had been hit 13 times and was recovering from facial injuries in a hospital in Sri Racha.