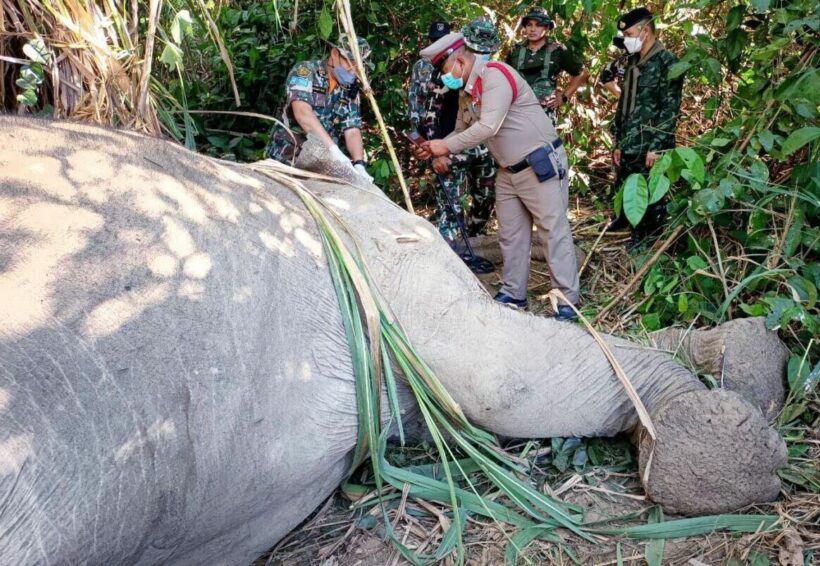 Grandfather of Pala-U, a 60 year old elephant who died after being shot more than 120 times, will be aided by forensic experts in an attempt to identify his killer. Earlier this month, the elephant was found in Phetchaburi province with more than 100 bullet wounds all over its body.

Last Saturday, despite the best efforts of veterinarians who have been treating the bullet-ridden animal, the elephant finally succumbed to his wounds. Officials announced that after being shot more than 120 times, Grandfather of Pala-U had died of sepsis in medical care.

The elephant was likely shot after straying from Kaeng Krachan National Park in Phetchaburi onto some farmlands while foraging for food. Animal experts believe that he had likely become separated from a younger herd of elephants or possibly been rejected by them and left to fend for himself.

After his tragic death, police have been investigating and trying to identify who shot the elephant. The Commander of the Phetchaburi Provincial Police announced that he had been working with officials from the National Park and veterinarians on the case, and now are utilising the skills of forensic experts. The bullets that were recovered from the 60 year old elephant’s body were sent to a forensic lab for analysis to try to find clues as to the identity of the person who fired all those gunshots.

Around 180 elephants live in the area between Kaeng Krachan National Park, which was dedicated as a world heritage site last year, and Huai Sat Yai and Pala-U in Prachuap Khiri Khan. It is entirely possible the elephants will stray onto farms nearby the parks to eat the crops. The head of the National Park advises people that if they encounter an elephant on their farm, they should immediately contact park officials rather than taking any vigilante actions like the person who gunned down Grandfather of Pala-U.

harry1
l thought elephants were a sacred to Thai society and Buddhist,shame on those,who could had used fireworks or other method
Santa
11 hours ago, Thaiger said: in an attempt to identify his killer. Why 'killer'? 120 bullets is a lot of bullets' for just one person.