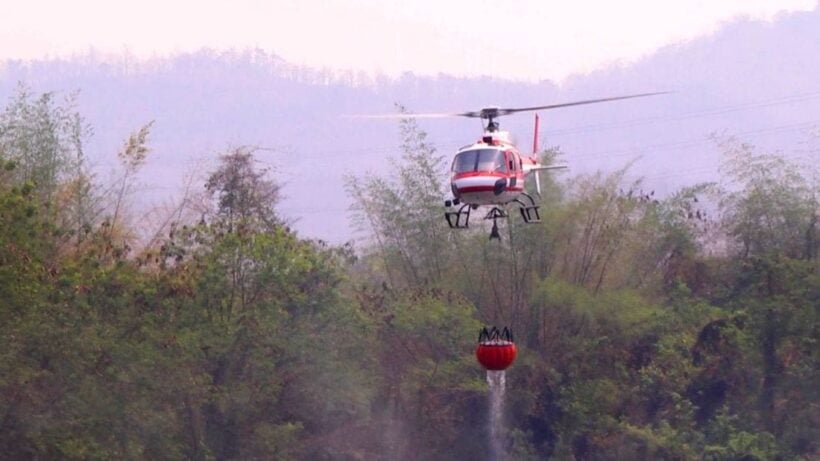 Adding to the air pollution woes of the north, bushfires have been keeping state firefighters and volunteers busy trying to control the outbreaks in the mountains east of Chiang Mai and north of Lampang.

The efforts yesterday were to battle a front of multiple fires in Doi Phra Baht forest in Lampang’s Muang district.

Fires have been erupting in multiple locations since March 3 and have spread quickly in the hot, dry conditions through the mountainous area, despite strong efforts to control and extinguish them.

Officials from provincial fire control units have been joined by volunteers, soldiers and local administrative officials in a 24/7 battle against the fires, with the help of a helicopter from the Natural Resource and Environment Ministry. 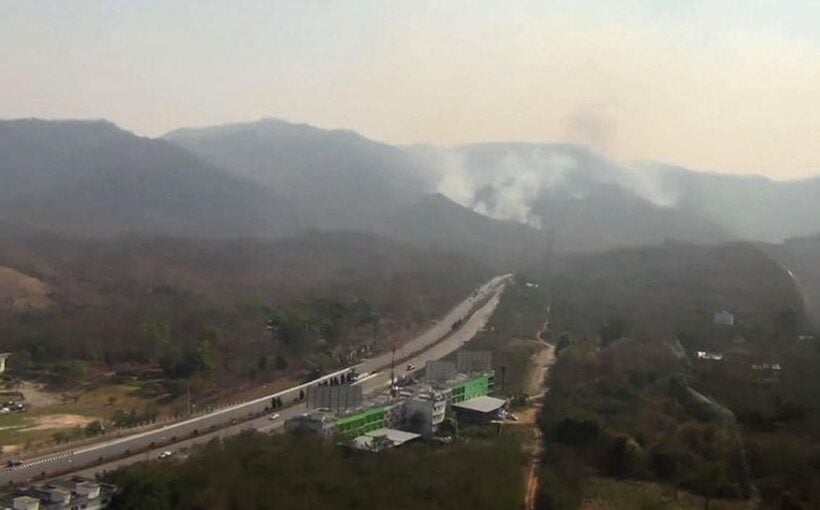 Air quality in the northern provinces has continued to be poor, particularly around the fire hot zones.

But air quality readings at four stations in Chiang Mai – which had previously been hit with high PM2.5 levels – were “good” and “very good” with levels at 19mcg to 37mcg on Tuesday.

Air quality around the Nan and Lampang firezones continues to be poor as of midday Wednesday.

A Chiang Mai University student now has the numbers of “112” carved across his chest after using a razor blade on himself in defiance of the Section 112 of the Criminal Code, also known as the lèse-majesté law. The student took to cutting himself after arriving at the police station to face charges of violating the law. He was also charged with breaching the National Flag Act.

The 23 year old student and his colleague, are facing charges brought by political activist Srisuwan Janya after the duo allegedly placed an altered Thai national flag, featuring critical words against the monarchy, at an exhibition site at the university. Police tried to prevent him from harming himself further, as Vitthaya claimed it was an act of freedom of expression, but he was taken to the police station for first-aid treatment. The other student told reporters that he did not amend the Thai flag as police alleged, citing again, that it was a work of art. Both students are now released, but must come back to report themselves on May 31.

Thasanai Sethaseree, a university lecturer at the Faculty of Fine Arts, says the use of the Thai national flag in a work of art does not constitute a violation of the Thai National Flag Act. However, the lecturer didn’t comment on whether the words adorning the flag would constitute a violation of the lèse-majesté law, or Section 112 of the Criminal Code of Thailand.

Last Thursday, jailed student activist leader Panusaya “Rung” Sithijirawattanakul was granted bail of 200,000 baht after repeated denials of bail requests over the last 2 months. Rung was detained on charges using Thailand’s strict lèse-majesté laws that carry a 15-year maximum sentence for insulting the royal monarchy and has been held without bail since March 8.

Police in Northern Thailand arrested 3 senior journalists who had fled Myanmar due to orders from the military junta to stop reporting, the director and editor of the news agency Democratic Voice of Burma said in an email to the Associated Press.

The journalists, along with 2 associates, were arrested yesterday in Chiang Mai for allegedly illegally entering Thailand. Police were doing a random search, the editor says.

Since the February military coup in Myanmar, ousting state counsellor Aung San Suu Kyi who had won the election in a landslide, more than 750 people have been killed by security forces. The military takeover also led to a clash with ethnic armies who support the anti-coup movement, including the prominent armed wing of the Karen National Union. Around 2,000 Karen refugees have fled to Thailand’s Mae Hong Son province due to violence between the Karen troops and the state military.

The junta has attempted to silence independent news media by arresting dozens of journalists and by revoking licenses that had allowed agencies to report in Myanmar. The Foreign Correspondents Club of Thailand, or FCCT, says more than 70 journalists have been arrested since February. The Associated Press says there are currently around 40 journalists in detention in Myanmar, including at least 2 that work for DVB.

Many of the journalists arrested by the military junta are being held for violating Myanmar’s Penal Code which prohibits comments that “cause fear,” spread “false news, agitates directly or indirectly a criminal offence against a Government employee.” The charge carries a punishment of up to 3 years in prison.

The editor of DVB is urging Thai authorities not to deport the detained journalists and activists, saying “their life will be in serious danger if they were to return.” Photos in Thai media shows what looks like a video production studio set up at a home.

“They have been covering the demonstrations in Burma until March 8 – the day the military authority revoked DVB’s TV license and banned DVB from doing any kind of media work.”

The FCCT also released a statement calling on Thai authorities to release the journalists and offer them protection in Thailand.

These 5 individuals would face certain arrest and persecution, if not worse, for their work and association with the DVB, and under no circumstances should they be deported back to Myanmar.

Rather, the DVB journalists and their associates should be released from detention, urgently offered protection, and granted the right to remain temporarily in Thailand.

PHOTO: Jason Balzar, pictured with his wife before he murdered her, and during his arrest. (via uk.granthshala.com)

The American man accused of the murder of his Thai wife in Chiang Mai has now confessed to the brutal crime. And it may not have been the first time he tried to kill her. The 32 year old man, who was a computer programmer in the United States, admitted that he killed his wife while she was 3-months pregnant. Jason Matthew Balzar is now in custody at Muang Nan police station and has reportedly told police that he stabbed his wife Pitchaporn “Som O” Kidchob in the chest with a knife while she slept.

Police said after stabbing his wife, Jason put her body in a plastic bag and dumped it on the side of the road on Ban Srikerd-Samun Road, about 10 kilometres from their rented home at Tambon Chaiyasathan in the Muang district. A crime re-enactment was held at their home, a common occurrence in Thailand for police to piece together criminal acts and record details.

The murder was not Jason’s first accusation of violent crime, with details surfacing of his 2019 conviction for threatening to murder a woman in the US. There is unconfirmed speculation that the victim of that attack was the same Thai wife murder victim, but in Colorado domestic violence cases withhold the names of victims.

He was sentenced to 2 years of probation after an attack in Longmont, Colorado that was originally charged as attempted murder, but lessened due to a technicality. According to the arrest report, Jason attacked her after she refused sex, hitting her head and pointing a gun at her, which fired near her head. He was again arrested for violating his probation by possessing 73 guns in December 2020.

After confessing to killing his pregnant Thai wife, Jason is being charged with the murder and with concealing her body. The American man claimed that he decided to kill her in her sleep because he was upset that she wanted to leave him. The couple had plenty of rough patches with frequent arguments being common in their household.

The victim’s family don’t believe the murder was a sudden crime of passion. Her sister and mother said they have often seen him carrying a knife.