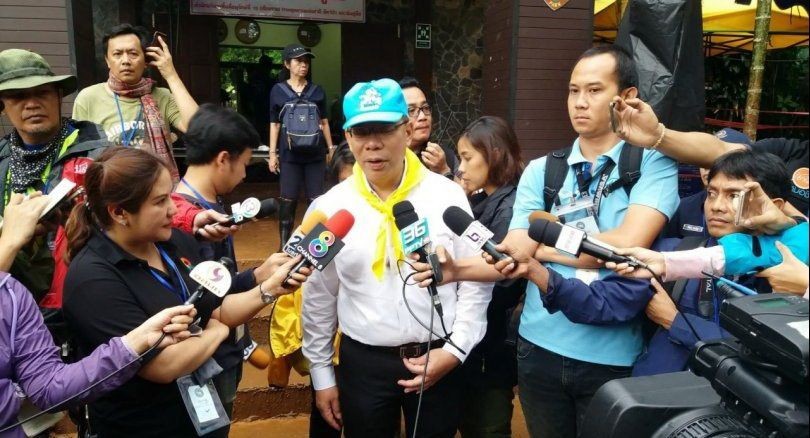 “Operation to rescue footballers a success but not over yet.” Chiang Rai Governor.

“The operation to rescue the 13 missing Mu Pa Academy football club members was a success,” the head of the mission declared after all 13 members were found alive on Monday night on a ledge in the Tham Luang cave in Chiang Rai province. The discovery follows a marathon search operation.

However, Chiang Rai Governor Narongsak Osottanakorn, who heads the operation, says there was still challenges ahead in bringing them out of the flooded cave in Mae Sai district. The 12 boys and their deputy football coach, who have been missing since June 23, were found by two specialist British cave divers in a drama that has gripped the nation.

The governor said the initial estimates of the health of the team members showed they were ‘fine’.

“From the video clip shot when the British divers found the boys, they looked exhausted given the fact that they were there without food and water for many days. If we had to choose between green as the best, yellow, and red the worst, they look to be green.”

It is reported that 16 Navy SEAL divers have been sent to the location, called Nern Nom Sao slope, to stay with the boys, to keep tabs on their health and prepare them for evacuation. The divers took some special food such as power gel and water for them.

Governor Narongsak says the process to prepare the boys for evacuation will take a few days and the best way is still being considered.

“They will be taken out of the cave, when it is safe enough. The challenge now is to bring them out safely, as rising water and mud are still impeding access.”

Meanwhile, other efforts to access the cave, such as drilling through the cave roof, and finding alternative passages, as well as draining water out of the cave, will continue.

The governor thanked both Thai and international volunteers for their dedication in the operation, which he had earlier described as mission impossible. The governor praised and gave credits to two British cave diving experts who found the missing team. He did not mention the names but it is understood to be John Volanthen and Richard Stanton. He appreciated the personnel and equipment support received from the US, the UK, China, Russia, Belgium, Japan, Laos and Israel.

“The crucial factors that made this operation a success were the well organised cooperation and management,” he said.