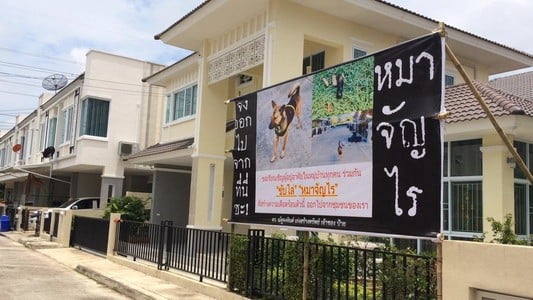 “Get the hell out of here! You accursed mutt!”

A Chiang Mai estate resident has ramped up neighbourhood disputes to the next level. They’ve erected a huge vinyl sign to demand that the neighbour remove his dog that he says attacked his pet poodle.

The dispute, besides the one between the neighbours, is between a poodle named “Mammoth” and the other dog, “Jao Bo”. 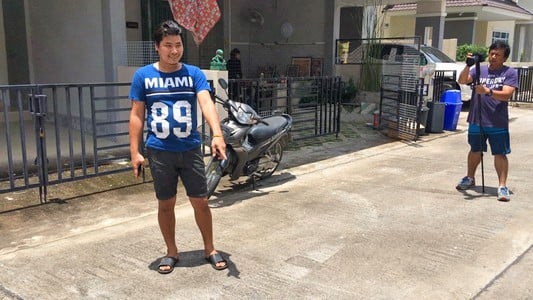 “I am pointing at concrete.”

Manager Online went to the Deeya estate in Saraphee and spoke to the owner of Jao Bo, 38 year old Weerachai Sriploirung. Hardly surprisingly, he gave a different account to that of warring neighbor.

Mammoth’s owner claims his precious poodle was bitten after Jao Bo trespassed on their land. But Weerachai insisted that while Jao Bo did bite Mammoth, it happened outside his own house after Mammoth got out in the street (which apparently makes it OK). Weerachai says he even protected Mammoth from a further assault by cradling the poodle – for which he was bitten for his trouble.

The wound drew blood and after his work, went to get a tetanus jab at the doctor.

Still, Weerachai has paid the owner of Mammoth 2,000 baht for his dog’s bite and has moved his own dog away to a relative’s house in Mae Rim to avoid further trouble.

He said he had not even asked Mammoth’s owner to pay for the vaccinations and follow up treatment for his own injury. Mammoth’s owner appeared not to be home when the reporters went to the estate so their side of the story hasn’t yet emerged.

Seems the only winner in this battle is the local vinyl sign company. We’ll keep you posted on the big news in Chiang Mai and the ongoing dispute between Mammoth (who we suspect isn’t very ‘mammoth’) and the poodle-hating Jao Bo. 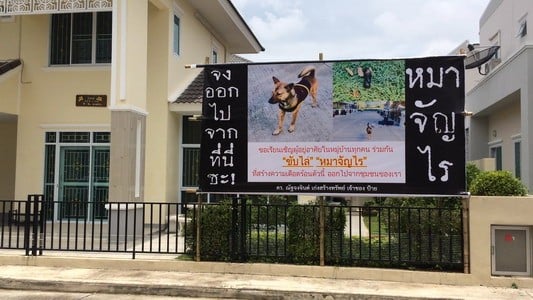