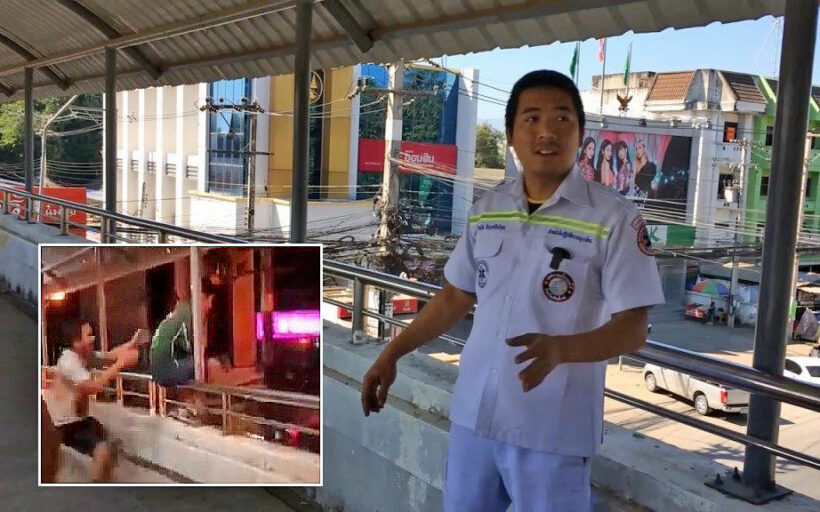 A rescue worker dressed up as a homeless man to thwart a possible suicide attempt of a young student who was about to jump from a pedestrian bridge in Chiang Mai.

Withawat Sinworasrithaweekhun, chief of the rescue team, headed to the bridge in front of Chiang Mai‘s Maejo University overt the weekend after learning a young student was contemplating suicide and poised on the bridge, with an intention to jump.

He found the student sitting perfectly still on the edge of the bridge and peering down at the traffic below. The young man didn’t say a word, despite police efforts to talk him down for over an hour.

So Withawat came up with a plan. He changed his clothes into a dirty T-shirt and shorts and walked barefoot to a rubbish bin close by to the depressed student, and pretending to rummage through the garbage.

Police kept talking to the young man to distract him, all while Withawat edged closer. As soon as he got close enough, Withawat grabbed the youth from behind, swiftly pulling him back to the bridge and onto his own body so he didn’t hit the concrete floor.

Police then escorted the distraught student to the Maejo Police Station and contacted his parents.

“I didn’t mean to be a hero, I just wanted to save the young man. I succeded thanks to the police who distracted him.”

Recent research reported by The Thaiger reveals a disturbing figure that over 6% of university students in Thailand have attempted suicide. The findings have been highlighted by several students killing themselves in recent weeks. According to the research, most student suicide attempts are in dormitories or homes.

Common triggers, according to the research, are quarrels with friend and loved ones, learning problems, bullying and relationship issues.

“Health problems, anxiety, stress and poor ties with parents and friends contribute to depression,” according to Piyawan Visessuvanapoom, a lecturer at Chulalongkorn University.

“Given that half of university students’ lives are about studies, lecturers could play a role in preventing a descent into depression.”