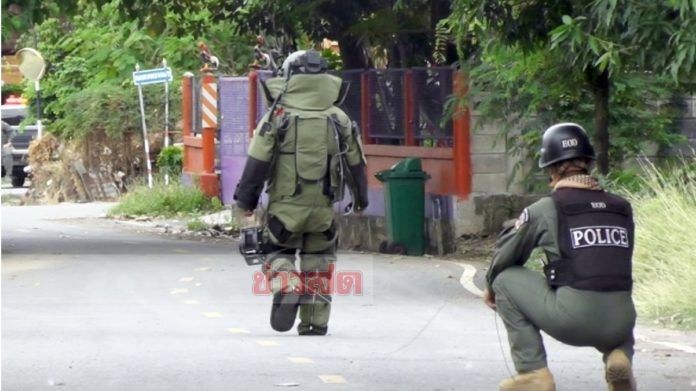 A man in Phetchabun province, central Thailand, has had a narrow escape after picking up an abandoned box, not realizing it was a bomb. Thai Residents reports that the unnamed villager, from the Tha Phon district, was cycling back from the local temple when he spotted a box with a clock attached to it lying on the ground.

He stopped to pick up the box, placed it on his bike and took it back to his shop. He says he planned to hang the clock on the shop wall as he could see it was still working. Once at the shop however, his employee pointed out that the box was probably a bomb. The man quickly placed the box outside the premises and notified authorities.

Officers from Tha Phon police arrived to find a cardboard box with a digital clock taped to the front and connected to various wires inside the box, and immediately alerted the Phetchabun Explosive Ordnance Disposal Team.

When the EOD team arrived, they placed a tire around the box, evacuated villagers from the area and used high-pressure water to defuse the bomb. The team confirmed that further examination of the device showed it to be “a timed improvised explosive device.”

Its purpose or intended target has not been disclosed.