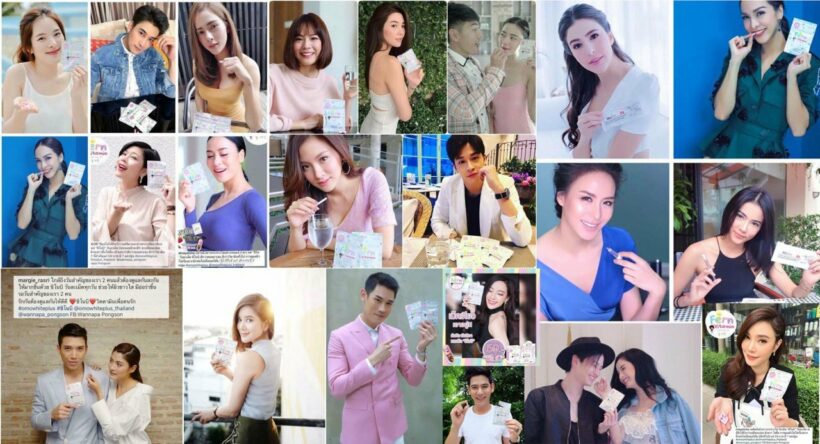 Over 50 presenters of commercials and videos for cosmetic products and food supplements of the Magic Skin Group are being summoned by police for interrogation.

56 actors and actresses were hired as presenters to promote and endorse products from the Magic Skin Group, adding that police would question them to find out whether they were aware or not that the products were illegal and that their qualities had been exaggerated or unproven.

The investigating police officer, Pol Gen Wirachai also warned celebrities to exercise more caution before accepting jobs to be product presenters and to find out whether the products concerned are legal or have been approved by the Food and Drug Administration.

The Magic Skin Group’s products include food supplements and slimming drugs under the trade names of Apple Slim, Slim Milk and Snow Milk.

Unlicensed cosmetic and food supplement product, valued at over 100 million baht, has been seized. The search followed complaints from several consumers, which also led to the arrests on Saturday of six suspects linked to the company and the freezing of its assets.

Police and consumer protection officials searched the factory and warehouse of Nature New Tree Company in Klong Luang district of Pathum Thani. The company is affiliated with the Magic Skin Group.

The seized products were sent for examination to determine whether they are legal or not.

Meanwhile, the lawyer for Magic Skin Group says the issue stemmed from labels on the products, which he claimed did not contain any dangerous ingredient, but cited a different manufacturing factory. He claimed that the firm had already been ordered by the FDA to make the correction. The lawyer believed that his clients were bullied due to a business conflict and would consider suing those defaming them.