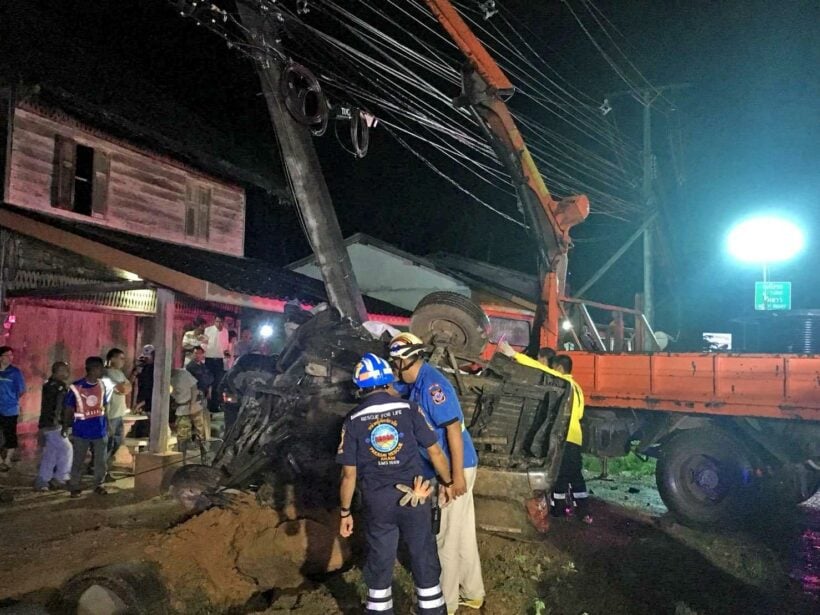 The pick up truck driven by a retired policeman, 61 year old Prayad Jongrak, with other 5 family members, was found crashed into the high-voltage electric pole on Petchakasem Road heading towards Krabi in Nuaklong district.

Nuaklong police and rescue teams found 5 dead bodies stuck in the car and asked the local PEA to cut the electricity in the area before using a machine to open up the truck and took the 4 bodies out. The rescue teams also found the dead body of a woman who bounced off the vehicle during the accident and one more child in the pickup truck. Total casualty is 6 people including the driver and four women; 58 year old Jansri Janlohit, 36 year old Wanlapa Rakthai, 58 year old Janram Khamlue, 37 year old Dara Rakthai and one year old Kamonsin Banditsak.

They were all sent to Nuaklong Hospital.

Police found that the family had driven to Trang to send their nephew to study and the accident happened on the way back to Krabi. The pickup tuck was turning at  a curve on the slippery road in heavy rain and lost control, hit a concrete pipe on the side road before twisting to hit the electric pole. Police say that initial investigations show that the front right tyre exploded while turning on the curve which could have caused the driver to lose control.

Police are still investigating the case. 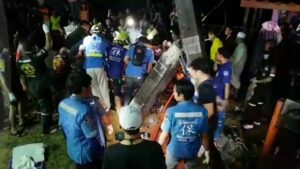