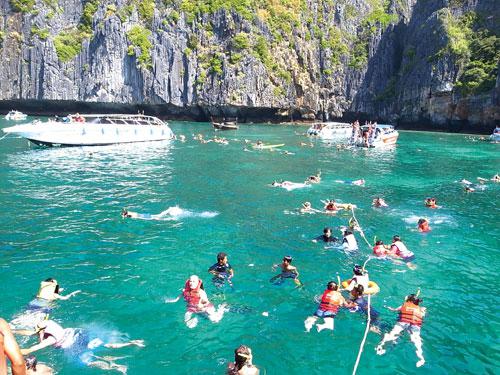 The governments of Thailand and China are working hand-in-hand to limit the number of tourists coming from the latter to the former, especially the “low-quality” ones, the [former] head of Phuket’s official tourism office recently announced.

Reinforcing Thailand’s efforts to shift focus from quantity to quality tourist markets, the Chinese government since October 1 has been enforcing new regulations affecting its outbound leisure traffic, which will limit the number of its outbound tourists overall, as well as eliminate so-called “Zero-dollar Tour” packages.

As part of the new regulations, Chinese authorities will scrutinise the itineraries of both Thailand and China based tour operators, who will be required to specify exact details of their tour programs. Moreover, the packages must be paid for in China only, and the Chinese tourists will not be allowed to partake in itineraries that are not explicitly stated in the original program. Tour operators deemed in violation of the new regulations will be subject to a 300,000 yuan (1.5 million baht) fine and/or face a revocation of their license.

“Zero-dollar tour packages have given a negative image to Thailand tourism for a long time,” Chanchai, who has since been reassigned to Bangkok, insisted.

He explained that such packages aren’t necessarily “free” packages but were sold to tourists at cheaper rates, subsidized through deals with commission-paying third party firms – jewelery galleries, souvenir shops and tailors, for example.

In other words, tour operators were also acting as commission-based “touts”, while tour groups were subjected to additional itineraries that they didn’t buy into.

“In the past, there was no strict regulation to address this problem and there were many bad tour guides who deceived Chinese tourists,” Chanchai said.

The local tourism chief went on to underline other issues associated with mass tourism, namely the lack of knowledgeable or qualified tour guides; shortage of transportation; congestion and strain on infrastructure as well as declining profits for tourism operators and other local businesses.

“I think the new regulation will decrease the number of low-budget tourists coming to Thailand and I believe that Thailand will in turn see increased profits from quality tourists. I don’t see any negative effects for the Thai tourism industry,” he concluded.

Some tour agents in Phuket disagree, however.

One Phuket-based operator who deals with inbound Chinese tour groups, told the Phuket Gazette that the number of bookings from this segment had decreased immediately following the announcement of the new regulations.

“Compared to years past, the number of travellers these days is higher, especially during the Chinese holiday periods. Chinese zero-dollar [packages] was an effective strategy to bring more Chinese tourists to Thailand and increase locals’ income,” said the operator, who insisted that both tour guides and companies have been greatly impacted, and will continue to be impacted by the new regulation.

The operator, who asked not to be named, explained that many local tour companies and related businesses enjoyed considerable profits by offering supplemental activities to Chinese tourists – hiring of speed boat trips, visits to jewelry showrooms, other shopping venues and so forth.

“Now, tour companies [serving Chinese tourists directly in China] will increase their tour package prices and reap all the profits from the sale of [supplemental] programs to tourists, while tour guides will end up earning only 1,500 baht per day. Nonetheless, we will try to find other solutions to increase our profits when Chinese tourists decline,” he said.

Indeed, the days of cheap mass tourism seem to be numbered, at least if the will of Thai and Chinese authorities is fully realized. Although many local tour agencies and their affiliate companies will immediately lose out on “mass margins”, with every threat arises a new opportunity – to find new solutions for the greater good of all local businesses. But only time will tell how Thailand’s mass tourism saga pans out.