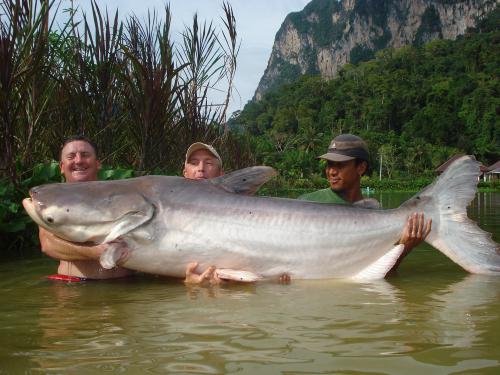 PHUKET: A British angler on holiday in Thailand is set to break a world record after landing a 60.9kg (134.4lb) Siamese carp in Krabi, across Phang Nga Bay from Phuket, earlier this month.

Keith Williams, of Carshalton in Surrey, England, landed the monster carp on October 10 while on holiday with friends at the Gillhams Fishing Resort to celebrate his 56th birthday.

“Keith could not sleep on Wednesday night, October 9. At 4am on Thursday, October 10, he was wide awake, sitting on his balcony overlooking the 12-acre [30-rai] moonlit lake,” resort owner Stuart Gillham explained to the Phuket Gazette.

“Drinking tea and speaking with his wife, he told her that he could feel in his bones that today he was going to catch a special fish,” Mr Gillham recalled.

“Keith was sitting at his chosen fishing spot at 6:30am, watching the dawn break. Every angler who passed Keith was told the same: ‘Today is going to be my day.’

“Keith’s target species was Siamese carp. By 11am he had landed three of them,” Mr Gillham said.

However, it may take up to six months to have the record landing ratified, Mr Gillham said.

“The new record needs to be officially ratified by the International Game Fish Association [IGFA], based in America. The application has been filed, but it could take up to six months,” he explained.

“To claim a world record, a fish must be caught unaided by the angler using a rod and line; scales to weigh the fish must be certified; and the fish’s length and girth must be measured. There must be independent witnesses and the angler must sign in front of a lawyer to affirm that he caught the fish by fair means,” he said.

Mr Gillham is no stranger to his resort setting world records.

“Every rule was adhered to in this claim and there is no reason why the claim will not be accepted. The processing of any claim is rigorously checked by the IGFA and can take up to six months to be accepted,” he said.