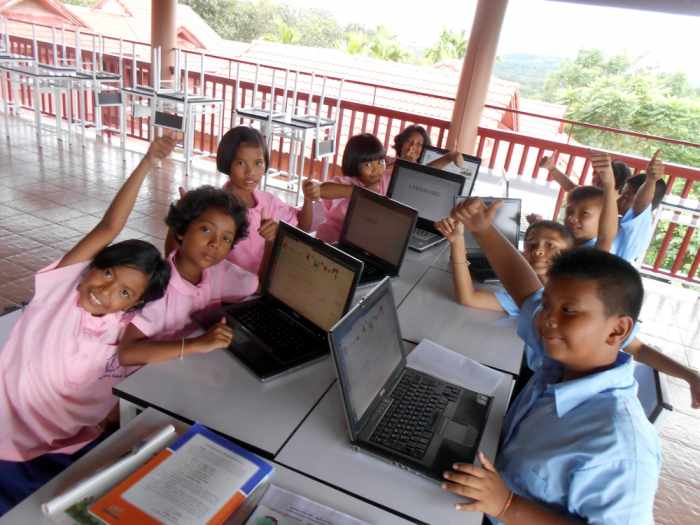 PHUKET: “Now more than ever, companies need to demonstrate transparency. They must show they are attuned to environmental issues. They should reduce carbon emissions, promote zero waste and host CSR activities to engage the public,” said the President of International Business Affairs of The Nation
Multimedia Group Pana Janviroj in the foreword of the latest issue of CSR Thailand magazine.

But there are companies out there who don’t need encouragement and do not wait for times to get worse to launch their corporate social responsibility activities. For some people and companies, CSR is their daily bread.

Phuket’s Thanyapura, under the new leadership of Philipp Graf von Hardenberg, is one such company.
Philipp took the reins of the sports complex just over a month ago and is already engaging his coworkers in their first CSR project.

“I mostly want to do something for the kids and young people,” says Philipp. “For me, the most important thing to do is educate them.”

These are more than words. Philipp and his legacy of work with Yaowawit School and efforts with underprivileged children in Phang Nga are well known in Phuket. And with a bit of effort and luck, so will his next project.

To state the obvious, schools need computers. At the same time, many schools in poorer regions have no way to afford IT infrastructure for their students. Government programs dedicated to solving this problem are usually expensive and ineffective – remember the recently scrapped One Tablet Per Child (OTPC) project?

Luckily, someone in San Francisco came up with a great idea to put the millions of old, unused
computers that lay around people’s houses and offices to work. These days, technology advances very fast, and marketing experts convince us to buy newer, faster, better machines all the time. In the meantime, the old ones, even though still perfectly functional, are left to the mercy of dust and time.

“I know people who have three, four old computers they never use and they have nothing they can do with them,” says Philipp.

This is how Labdoo was born – a non-profit, collaborative social network which allows enables laptops loaded with educational applications to reach schools throughout the world.

“The Labdoo people came up with a simple idea to wipe the unused computers clean, install new free software and donate them to schools and educational institutions in need. All you need to do is bring your old computer to the hub where a volunteer computer expert will take care of it. After that, the computer will be carried by a courier to it’s destination,” explains Philipp.

“This idea is free and it works already around the world,” he adds, and indeed it does. Since its inception in 2010, the Labdoo platform has grown to support over 310 schools in more than 95 countries, deploying more than 58 operational hubs spread over five continents while benefiting more than 73,000 students from around the globe.

Philipp started working with Labdoo in Germany. He got in touch with one of the local hubs and told them about the Yaowawit School. Soon after, he got registered in the program and was acting as a courier, carting computers to Thailand.

What’s wrong with this picture? It didn’t take Philipp long to realize things could be organized better.

“All together, I brought more than 20 computers from Germany to Thailand, but over time I realized that it doesn’t make sense to carry computers from Europe to Asia if I can get perfectly fine computers here. This is when I came up with the idea of starting a hub in Thailand,” he explains.

“I spoke to our IT team in Thanyapura and asked if they would be willing to volunteer some time to take care of the computers for schools. I asked the same question to some older students at Phuket International Academy… and everybody said it was a great idea.”

This is how the Phuket Labdoo hub came to be. As of now, it is up and running and waiting for your old, unused laptop that’s rotting away somewhere in your house. All you need to do is bring the computer to the front desk of Thanyapura and they will take care of the rest.

At this moment there are four members of the Thanyapura IT staff, plus two adults from the Phuket International Academy and 12 to 15 students involved in the program.

It shouldn’t take longer than a week for your computer to get a new life which consists of a new Linux-based operating system and new educational software, all approved by Labdoo. Once it’s ready, it’s the hubs responsibility to deliver it to those in need.

“There is one small, poor Burmese school that will get the computers – the sixth graders of the Phuket International Academy spend one day a week in that school – our kids do tutoring there, teach English and so on. This is the first school we want to help,” explains Philipp.

“There is also an orphanage about 2km from Thanyapura run by a Swedish couple who will get computers too. I also need some for Yaowawit School,” he adds.

Once the news spreads, there will surely be more. The computer’s owners can also decide where their gear will end up and once they name a beneficiary, all they have to do is to carry the machine to its new home.

“We brought the idea to Thailand and hope it will spread,” says Philipp. “We’re looking for people in Bangkok, Chiang Mai, Chaing Rai to start hubs too, and we’re getting a great response. By the end of the year there will be four to five hubs in Thailand.”

All that is needed now is your old, unused yet still usable laptop. An estimated 50 million tons of
e-waste are produced each year. If you do not want to add to this number, bring your computer to Thanyapura to keep it up and running for a good cause.