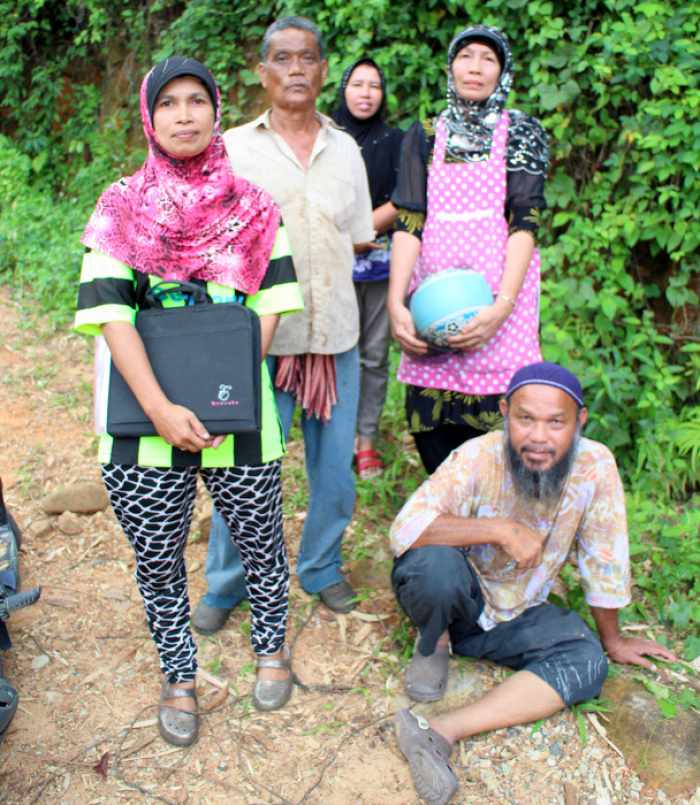 PHUKET: A family of farmers trying to sell nine rai of land with an estimated value of 60 million baht have come under scrutiny for trying to upgrade a SorKor 1 deed for the site to full Chanote status.

Phuket Vice Governor Somkiet Sangkaosuttirak led officers to inspect the site yesterday after receiving an anonymous complaint asking for the Governor’s Office to intervene in the title upgrade for the plot, which sits in the hills above Kathu with views of Phang Nga Bay.

Also present was Prapan Kanprasang, chief of the Damrongtham Center (ombudsman’s office), which received the complaint.

“The complaint said that the site was located within the boundaries of a protected forest, for which a land title could not be legally issued,” Vice Governor Somkiet told the Phuket Gazette.

“By law, if the SorKor 1 was legally issued before the area was declared a protected forest, the owner will have the right to apply for the SorKor 1 to be upgraded to a Chanote.”

Supranee Ngankheng, 48, accompanied by family members, presented a copy of the SorKor 1 the family says supports their right to the land.

Ms Supranee said the copy of the SorKor 1 was issued by the Phuket Land Office, which is evident by the official stamp of the office on the deed.

“We have owned [sic] the land for more than 70 years. The SorKor 1 was issued to my father. We have grown rubber trees and pineapples here for more than 30 years,” she told V/Gov Somkiet.

The family realized they needed to upgrade the SorKor 1 to a Chanote in order to sell the land when a Thai investor offered to upgrade it for them so he could buy it, Ms Supranee explained.

“But we declined his help and decided to do it by ourselves in 2012. That might be the reason why we are having difficulty upgrading the deed,” she said.

Thanyakan Thanopajairat of the Phuket Land Office explained to the Gazette this morning that SorKor 1 documents recognize only possession, not ownership, rights to a parcel of land.

He also confirmed that the registered name of the person a SorKor 1 was issued to could not be transferred to another person.

However, Mr Thanyakan said that Ms Supranee and her family still had the right to sell their right to occupy the land long after the original rights owner had died.

Yet, Mr Thanyakan cautioned, before the Land Office will accept the application to upgrade the SorKor 1, it must be cleared of all suspected illegalities by the investigation led by V/Gov Somkiet.

The officers have yet to confirm whether or not the plot claimed is in a protected forest area, V/Gov Somkiet told the Gazette.

“Rice fields should not be high in the hills. This might indicate that document was issued illegally as a ‘Flying SorKor 1‘.”

“Flying Sor Kor 1” are title deeds that have been legally issued for a specific plot of land, but are then applied to another plot of land elsewhere.

“I will assign officers from the relevant departments to investigate the origins of this SorKor 1,’ V/Gov Somkiet said.

“If it is found to have been issued illegally, we will reject the application and investigate who was involved in issuing it.”

Tourists on ‘walk-in’ visa entries to get 30-day extensions