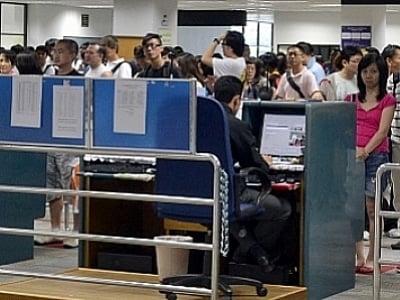 PHUKET: Capacity at Phuket International Airport is expected to reach critical levels this year with the thriving tourist destination projected to receive a staggering nine million visitors in 2012, according to a report released by leading hospitality consultancy C9 Hotelworks today.

Bill Barnett, Managing Director of C9 Hotelworks and Phuket Gazette Property columnist, reports that the airport is officially capable of handling a total of 6.5 million passengers per year, but the extraordinary growth of Phuket has propelled arrival numbers way beyond expectations and there are increasing fears of overcrowding and disruption to services.

Last year, the airport exceeded stated capacity by 30% with a total of 8.4mn passengers passing through the terminal.

The Thai government recently reignited a US$180mn expansion plan that includes the addition of a new international terminal, for which anticipated completion is an unspecified date in 2015.

The C9 Hotelworks Hotel Market Update 2011, a hard copy of which will appear in the Phuket Gazette due out on Friday this week, also reports that island-wide accommodation occupancy was 75% for the year – another milestone for Phuket.

Mr Barnett notes that in a year underscored by global media attention on Bangkok’s political crisis and the worst floods the country has suffered in more than half a century, “Brand Phuket” continued to thrive with “a remarkable sense of demand driven agility”.

“But despite the new historical highs, there is a paradoxical progression of mass tourism, with the surge in demand creating issues for the destination’s famed infrastructure,” says Mr Barnett.

“Clearly, planning is behind the 8-ball with a 2015 date now firmly on the horizon. But with the upgrade only set to accommodate 12.5 million passengers, the new airport may be redundant by the time it hits the market,” he notes.

Bali, regarded as one of Phuket’s major regional competitors, is seeing fast-tracked expansion of a new terminal for overseas passengers now set to open in time for APEC 2013.

According to the airport authority at Ngurah Rai International Airport Denpasar, once completed the facility will be able to accommodate 25 million travelers a year.

The number of international direct flights has grown most notably from the source markets of Australia, China and Eastern Europe, together now commanding a 32% share of the international marketplace, said the report, noting that key hotel metrics had pushed up performance to a five-year high, with a US$135 average room rate and RevPAR of US$101.

Reflecting on the precarious growth model that Phuket is following, Mr Barnett adds, “Effective destination management rather than marketing is at the heart of the matter and what is required for the island to achieve long-term sustainable growth.

“A national government agenda is urgently needed to address growing transportation, rising crime and regulatory issues. By 2015 the total number of rooms on the island is forecast to exceed 50,000,” he says.