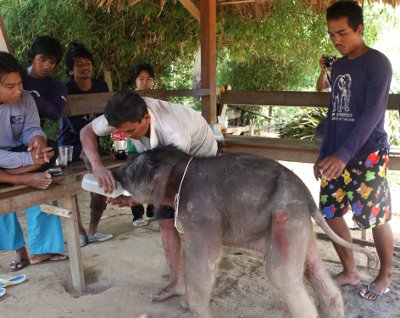 PHUKET: The owners of the Kinnari Elephant Camp in Rawai this morning announced the birth of a baby elephant at the camp.

Pang Saifon, born at 1:49am, is the second elephant to be born at the camp.

The newborn weighs 75 kilograms and is in perfect health, said Jirayu Nirunwiroj, a veterinarian from the Phuket Livestock Office’s Animal Health Development division.

“We have to take very good care of her at the moment as her mother [“Pang Gaewta”] isn’t nursing her. We’re feeding Pang Saifon bottled milk taken from her mother,” he said.

“Mother’s milk during the first three days is very important. Soon we’ll try to get Pang Saifon closer to her mother so that she can get used to her baby and allow her baby to drink milk from her,” Mr Jirayu said.

“I asked the camp owner to build a new large pen for just the two to stay together,” he added.

Pang Gaewta is a very young mother. Normally elephants start mating about the age of 10 or 11. However, Pang Gaewta fell pregnant when she was only eight.

According to the Phuket Livestock Office, only six elephants have been born in Phuket since 2001.

“I wasn’t sure if Pang Gaewta would get pregnant, since the bull elephant, Plai Thongpoon, was scheduled to mate with three female elephants on that day. Pang Gaewta was the last one and she was the only one that got pregnant,” he said.

“Pang Gaewta start to cry from about 9pm last night. I think she was suffering from birth pains, just like humans do. She finally gave birth at 1:49am.

“It was raining heavily while Pang Gaewta was in labor, so we named the baby Saifon [“falling rain”] because the moment she was born the rain stopped,” Mr Sommai said.

Jarung Taojan, owner of the Kinnari Elephant Camp, said that with the arrival of Pang Saifon the camp now has 20 elephants.

“Our first baby elephant was Plai Peemai, who was born on January 4, 2009. Both Plai Peemai and Pang Saifon share the same father,” he said.

Tourists have been flocking to the camp to see the newborn.

“Pang Saifon is our new star. We will take our best care of her,” Mr Jarung said.