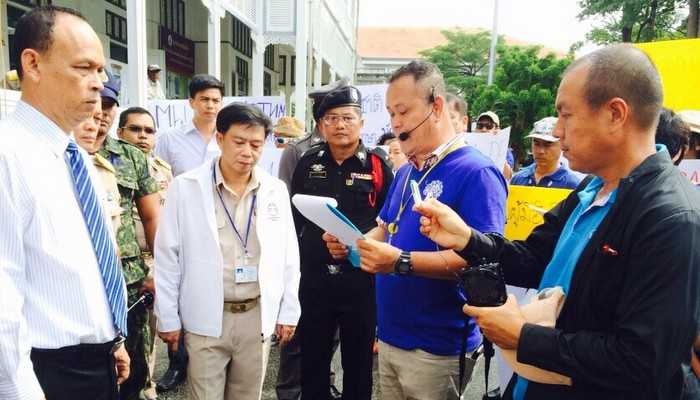 PHUKET: Dozens of local tour guides calling themselves the “Andaman Guides” gathered outside Phuket Provincial Hall this morning to present a letter demanding serious action be taken by authorities against illegal tour guides working on the island.

The letter, which stated that illegal guides were taking the jobs of legal tour guides, was handed over to Phuket Vice Governor Somkiet Sangkhaosutthirak and Santi Pawai, director of the Ministry of Tourism and Sports (MOTS) Phuket office.

“We would like to ask the MOTS to arrest illegal tour guides, as everybody knows this kind of job is reserved for Thai people. To date, no serious action has been taken and illegal guides continue to operate with impunity,” said the letter.

Among the Andaman Guides’ demands was that police set up special teams to catch illegal guides while working, as well as shutting down tour operators that knowingly employ foreigners illegally.

“We have filed several complaints against business operators who allow foreign tour guides to work without being accompanied by local guides, but nothing has been done,” the letter said.

“We already have Thai tour guides who are trained in such languages as Chinese, Russian, Korean, Japanese, among others, and yet these local guides do not get hired, which is unfair,” said the letter.

“We would like to ask Phuket Governor Nisit Jansomwong and the MOTS to urgently help us in this matter.”

Photos of foreign tour guides working illegally were also attached to the complaint letter as evidence.

Then in January this year, about 100 Chinese-speaking Phuket tour guides protested in front of a travel company, alleging that it was hiring Chinese nationals illegally (story here).