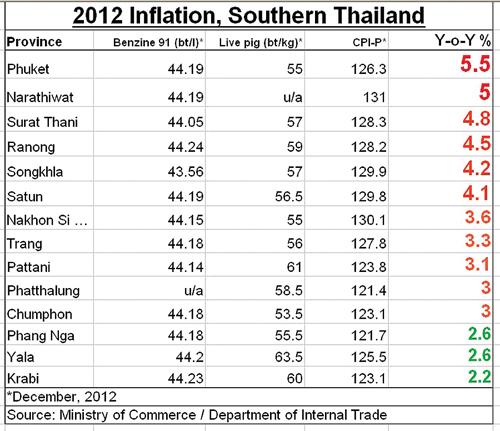 PHUKET: Not only is Phuket still considered the most expensive consumer province in Thailand, but its annual inflation rate remains the highest in the South – the Kingdom’s most inflated region.

Thailand’s cost of living in 2012, as measured by the Consumer Price Index (CPI), rose by 3.02% from the previous year, while overall inflation in Phuket was measured at 5.5%.

The figure is in line with the MoC’s initial prediction of an annual inflation rate of between 3-3.4%.

December’s y-o-y inflation of 4.5% was mainly attributed to a 4.9% increase measured in food and beverage items (f&b), which was calculated from price increases in fruits and vegetables (11.6%); out-of-home consumer foods (5.6%); meat, poultry and seafood (4.9%); in-home consumer foods (3.4%), non-alcoholic (3.1%); rice, flour and flour products (1.3%) and egg and dairy products (0.5%); meanwhile, the Phuket Commercial office reported 1.7% deflation in the food condiments category.

Non f&b items inflated y-o-y by 4.2%, calculated from a 9% jump in clothing apparel and footwear (men’s and ladies’ shirts and student badges); as well as inflation in tobacco and alcohol products (7.8%); packaging, transport and communications – including the price of petrol, public transportation and automobile expenses (6%); housing – including construction materials, labor, utilities and energy (2.4%); personal health care expenses and pharmaceuticals (1.3%); and a 0.5% jump in entertainment, reading, education and religion – a category which includes sporting goods and pet care expenses.

Meanwhile the category for entertainment, reading, education and religion experienced deflation by 0.5%.

PATA meeting questions whether Thai culture is good for tourism