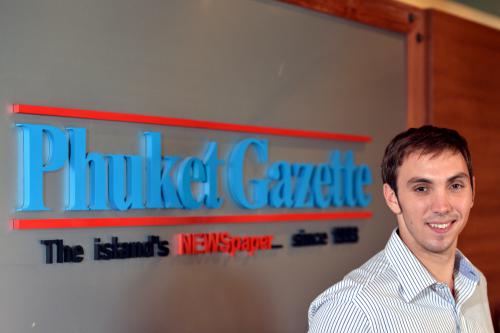 PHUKET: The Phuket Gazette is pleased to announce the recent promotion of Isaac Stone Simonelli to the position of managing editor.

Having spent his years at the Gazette in various roles, including PGTV news presenter, news editor and then head of both the news and reporter teams, Mr Simonelli is well versed in the major local, national and international issues that affect Phuket people most.

“We stand at an exciting point in time for the industry, as a wealth of new ways to deliver content continue to crop up,” he remarked.

“I’m excited to be part of the management team of the island’s leading newspaper and the Gazette Online, Google’s top-ranked website for Phuket,” he added.

Mr Simonelli is a graduate of Indiana University, with a double-major in Anthropology and Underwater Archeology.

In his new role, he will oversee editorial policy and content management for both the web and the newspaper, leading a team of eight foreign editors and the tasking of six Thai reporters.