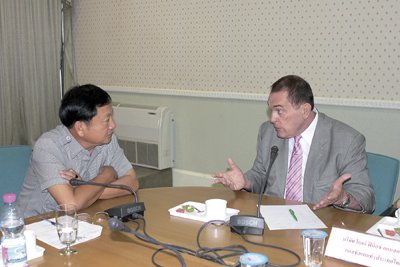 “We are the biggest company in China and the 80th largest company of the top 220 big construction companies in the world,” said Mr Zhu Dongru, CGGC Southeast Asia Branch General Manager.

“We have projects in 49 countries worth more than US$4 billion in investment. We even worked on a major waterworks project in Bangkok 30 years ago,” he added.

“The company is also backed by the Chinese Government. Not many companies are underwritten by their governments,” he added.

Mr Zhu told the press, “I know Phuket really needs a better transportation system. I saw the traffic on my way from Phuket Airport into town… Phuket is growing through its tourism industry.

“We can easily loan the budget from banks in China. We are supported by the Chinese Government,” Mr Zhu affirmed.

This visit follows the visit of another multinational delegation of representatives interested in developing the island’s light-rail system, and the Patong Tunnel.

Woo Mei Bo Mable, finance director of Gold Phoenix Construction Consultant Co Ltd, said her group was in Phuket to collect details about the construction requirements of both projects. These would be studied in depth, after which time the company would confirm whether or not it is prepared to move forward.

Gold Phoenix, which set up offices in Bangkok last April, is the Thai arm of Zhi Shan Yan Construction Shares Ltd, a joint-venture firm with offices in Hong Kong and South Korea.
Ms Mable said the study for the light-rail project provided by Phuket Provincial Office was now 10 years old. It comprises three routes covering a total of about 70 kilometers at an originally estimated cost of 22.5 billion baht.

The team’s engineering consultants in Japan would study the requirements from April 15 to 22 and determine how much it would cost. The original cost projection appeared to be “in the right ballpark”, she said.

All of the needed funding for the project is already available and the company could begin work within three months of approval, she said.

“If everything is okay, we will come back to confirm our interest in investing in Phuket,” she said.

The company’s initial interest in the project stemmed from Phuket’s designation as the world’s fifth most popular tourist destination, she said.

It was the second time Golden Phoenix representatives have visited Phuket, following a visit made in June last year with a multinational group of executives, engineers and investors from Japan, Taiwan, Hong Kong and the US.

He told Governor Tri that his company was interested in funding both projects, which were approved in principal during the “mobile Cabinet” meeting in Phuket last month.

Gov Tri said both projects could be developed a the same time, but they had to be presented to his office separately, and that as soon as the company submits its report to his office he would forward it to the Ministry of Transport for review and possible Cabinet approval.

Mr Wang said that the light-rail project would probably require about US$500 million (15.5bn baht) investment, while the Patong Tunnel would cost about US$200mn (6.3bn baht).