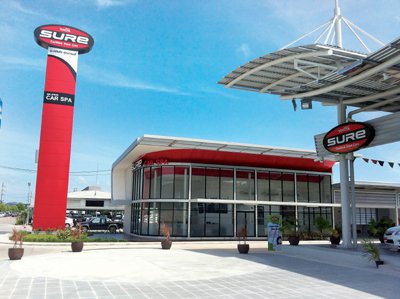 PHUKET: With so many new cars hitting the streets, the island’s used car and trade-in market is rapidly growing – particularly good news for car owners having second thoughts about a recently purchased or leased vehicle.

Speaking exclusively with the Phuket Gazette, Phuket’s Toyota Sure Deputy Managing Director Chaipat Na-Ranong said, “Our aim is to be a one-stop service. It’s not uncommon for customers who buy a new car to change their mind and want to trade it in.

“We provide that option for them, at good prices. Customers can rely on our trusted quality and service.”

As for buy-in criteria, Toyota Sure considers cars which are less than 5 years old, or those which have clocked less than 120,000 kilometers.

Phuket’s Toyota Sure is the 8th such branch to open in Southern Thailand. Other regional branches are located in Krabi, Trang, Haad Yai, Songkhla, Nakhon Sri Thammarat, Surat Thani and Chumphon.

Asked why Phuket’s main Toyota dealer took longer than respective dealers in neighboring provinces to open a Toyota used car dealership, Chaipat said, “Actually, we’ve planned to open Toyota Sure in Phuket for quite some time.

“However, it requires a lot of investment to do everything all at once, and with business you always have to consider cash flow. I can’t speak about the strategy of other Toyota dealers, but over the last 5 years most of our concentration in Phuket has been in the new car market.

“Demand and sales targets for new cars have continued to increase every year. Now that the business is going steady, we are ready for the next step.”

Toyota Sure employs a staff of about 25, which includes a sales team, technicians and administration personnel. The total investment for the new Toyota Sure and Car Spa facilities, including land and construction costs, is valued at about 150 million baht.

Side by side with the Phuket Toyota Pearl main office and new car show room, the newest addition sits on an area of about four rai (6,400 sqm), while the greater premises, spanning a total area of about 32 rai (51,200 sqm), also include a stock yard.

“We are also planning to open a paint and body shop by the end of the third quarter,” Chaipat said, noting that the total investment for the entire 8-year-long operation is about 1 billion baht.

As for the hold-up in Phuket’s Toyota Sure official grand opening, Mr Chaipat explained, “Before we hold the grand opening, everything needs to be ready. Mostly we’re waiting for furniture for the customer lounge and a new coffee shop, and, of course, more cars.

“We aim to have at least 40 to 50 cars before we’re fully ready, which should be within the next month or two.”

Chaipat said that the Phuket showroom currently has about 10 to 15 used cars on display, of which about 40% are buy-ins from Phuket, while the other 60% were shipped here from Toyota Motors Thailand, in Bangkok.

“When we’re fully operational, we expect to have about 80% of the cars to be from Phuket.

Owners of non-Toyota vehicles will not be neglected.

“Though about 80% of our stock needs to be Toyotas, we do consider buying and trading other known cars as well,” he said.