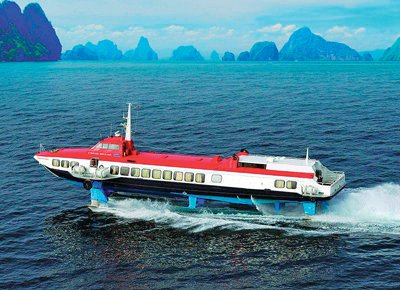 PHUKET: An innovative technology which looks to give a boost to the Andaman coastal region’s sea transport industry, is now being piloted off the shores of Phuket.

Benchmarked by the unofficial launch of a hydrofoil sea transport and tour service, swift and seamless day trips from Phuket to distant, offshore havens in Krabi and Phang Nga provinces are not only possible, but have already been successfully demonstrated.

As the region’s only working hydrofoil liner, the 128-seater “Flying Dolphin” embarked on its maiden voyage recently to the world-renowned Similan Islands, northwest of Phuket.

Proving its sea-scaling-superiority to 82 inaugural passengers on board, the 59-ton, 36 meter long vessel lived up to its promise by completing the 100-kilometer trip in only an hour and a half.

Denys van Rooyen, Advisor for the operator, Dolphin Seaways Co Ltd, told the Phuket Gazette that the key to the hydrofoil’s efficiency is its ability to maintain a constant speed.
“Large waves require other types of boats to constantly slow down and speed up, whereas a hydrofoil vessel can keep a constant speed. Essentially its hull is hovering above the water surface and thus is less affected by waves,” he explained.

In addition to its speed and comfort advantages, the hydrofoil is also more efficient in terms of capacity and fuel consumption.

“Due to less drag in the water, it consumes a lot less fuel than one would expect from a vessel of this size,” Denys noted.

With its hovering capabilities and jet-like characteristics, the cabin much resembles the inside of an airplane – fitted with both window and aisle Boeing airplane seats.

In many ways, a hydrofoil ride is more like traveling by air than sea.

Thus it’s only suitable that its service on-board includes entertainment and amenities as well as fresh fruit and refreshments served, while those who need a refreshing breath of air can enjoy the open air hallway, and clean western toilets.

Partnering with Dolphin Seaways is the crew of veteran tour agency Phuket Adventure Group Co Ltd, who will be coordinating shore transfers and other specialized touring services.

As for the official launch, Mr van Rooyen said that the service should be in full operation by the next tourism high season (roughly by October to November).

Meanwhile, the company plans to organize more pilot voyages over the next few months.