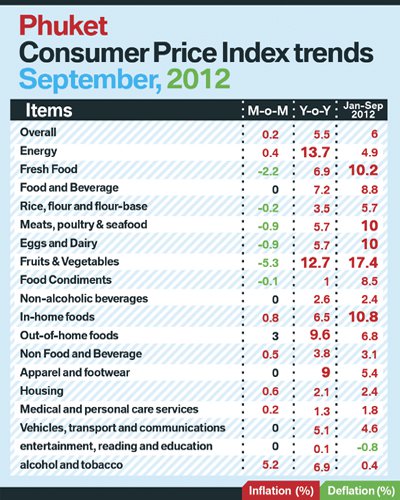 PHUKET: Once again, raw data from the Commerce Ministry has affirmed that the South, and particularly Phuket, continues to be “hotter” – in terms of the cost of living – than elsewhere in the Kingdom.

The Phuket Commerce Office, in conjunction with the Commerce Ministry’s Bureau of Trade and Economic Indices, recently published the Provincial Consumer Price Index (CPI-P) for September.

The report compared the cost of living in September 2012 with the previous month (m-o-m), and with September of last year (y-o-y). It also compared the first nine months of the year with the same period in 2011.

Thailand’s overall CPI study surveyed 417 consumer categories, but the CPI-P for Phuket looked at only 256, covering everything from food and beverages, apparel, shoes and day-to-day necessities, to medical and personal care services, vehicles, transport, communications, entertainment, education and religion.

According to the study, food and beverage items, on average, did not rise (even though from July to August 2012, the category rose by 1.5%). However, certain sub-categories did.

Meanwhile, the price of rice, flour and flour-based foods dropped by 0.2%; meats, poultry and seafood, eggs and milk products by 0.9%; fresh fruits (oranges) by 8.3% and food condiments, which includes seasonings and sauces, by 0.1%.

Prices of non-food and beverage items surveyed rose by 0.5%, compared to the previous month’s rise of 0.4%. This change was attributed mostly to the rise in tobacco and alcoholic product prices, which jumped 5.2% due to an increase in respective duties which took effect in August.

Housing utilities (electricity and water) rose in the month by 0.6%, attributed to an increase in the Fuel tariff (Ft) of the Energy Regulatory Commission.

The new Ft, effective from September to December, is 48 satang per unit, up 30 satang from the previous Ft of 18 satang. Meanwhile, medical and personal care services, which includes the cost of pharmaceuticals, nudged up by 0.2%. Fuel fell by 0.9%.

As for non-food-and-beverage items, average inflation was 3.8%, which came from a 9% rise in apparel and shoes; 6.9% jump in alcohol and tobacco products; 5% hike in vehicles, transport and communications – a category which includes fuel, public transport fares and automobile prices; a 2.1% rise in housing, and a 1.3% increase in the cost of medical and personal care services.

Meanwhile, prices of products and services related to entertainment, reading, education and religion declined on average of 0.8%

Phuket Business: Why the island continues to buck recession