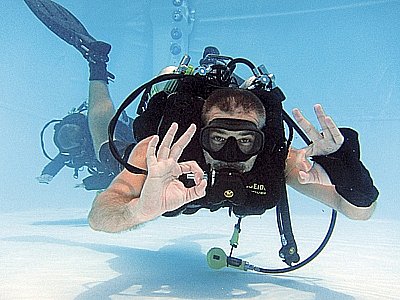 PHUKET: The pool is silent. Three divers, but not a sound. Then, right before our ascent, we flip the switch on our regulators to open-circuit. There is a roar of bubbles that destroys the silence – it’s inappropriate. Yet in reality, up until my recreational re-breather “Try Dive”, a cacophony of bubbles ballooning in my face was all I had known.

Almost every diver in Phuket, indeed the world, took their first precious underwater breath on what is technically known as an open-circuit configuration (what you most likely think of when you think of scuba diving equipment).

Silently going on deeper, longer dives was the draw and is still the draw for using a re-breather. They have been an essential tool for many tech-divers in exploring and discovering previously unknown parts of the underwater world. And this year, that same opportunity for exploration has come to the forefront of the recreational diving scene.

Admittedly, in the pool session of the “Try Dive” run by re-breather instructor Kevin Black from Kiwidiver there wasn’t much to explore: blue tiles, clear water, four walls… and yet it was exciting.

A re-breather triples your dive time. In many ways it’s like having a nitrox blender on your back, perfecting the oxygen content in the air you are breathing at any given depth. It is this efficiency that allows for longer, deeper dives.

Diving at Shark Point for a second time, there will no doubt be an array of stunning new moments. However, the path that you take, and the sea fan with the sea horse hidden nearby, will most likely be the same.

“An example is Koh Doc Mai. You can go off the northern end of Koh Doc Mai where there are several pinnacles at 30 and 40 meters that are fantastic to explore. There is a huge amount of marine life on them and no one ever goes there, because we can’t on an open-circuit system,” Kevin explained.

A chance to dive sites that have as yet been mostly inaccessible to recreational divers isn’t the whole package though – remember the silence?

“There is no intrusion on the marine life. So they tend to go along with their business and you can get right up close as they are not scared of you,” explained Kevin after the pool session.

“We miss 90 per cent of the marine life because it’s hiding from the noise, and until you dive on a re-breather and hear how noisy open-circuit divers are – you just can’t understand it,” he added.

The most elegant example can be seen in the footage of two of the greatest divers of our century, the world-renowned Jacques Cousteau and the first “modern” underwater photographer, Hans Hass.

Both have excellent footage (for their time) of sharks. However, Cousteau, who was diving on an open-circuit system, depicts an animal that appears nervous, while Hass’ footage, silently captured while diving on a re-breather, is able to embody the calm beauty of one of the ocean’s most enigmatic creatures.

How does a re-breather work?
In an open-circuit system, the air that is exhaled at a shallow depth has only used up about a quarter of the oxygen; the remaining oxygen, along with nitrogen and carbon dioxide, is bubbled out into the abyss. Because none of the inert gases (nitrogen and carbon dioxide) are used and only a fraction of the necessary oxygen is used, it is estimated that 95 per cent of exhaled breath from an open-circuit system is wasted.

A re-breather is a closed system, so the air exhaled is kept in the system.Used air runs through a hose to the bottom of a “scrubber”, which, with the little heat and moisture from a divers breath, causes a chemical reaction that absorbs the dangerous carbon dioxide and leaves clean air ready to be re-breathed. If such a cycle continued with no input, the air would eventually be devoid of oxygen, so the recreational re-breather will mix either compressed air or pure oxygen from two small cylinders on your back into the mix in order to create the optimal air for breathing at a given depth.

The history of re-breathers is rife with horror stories, many derived from divers not packing their scrubbers properly, causing “carbon dioxide hits”, where carbon dioxide rich air is breathed in by a diver, to devastating ends.

Now, however, with the Poseidon MKVI, all scrubbers are pre-packed, and ready to go. In addition to this safety precaution, a computer analyzes and mixes the pure oxygen and compressed air to eliminate human error.

If there are any issues with the blend, there are a variety of display warnings as well as an audible alarm and a vibrating mouth piece to ensure a diver is aware of the situation. Because the dives are no-decompression recreational dives, a diver with an issue will simply need to flip the switch on their mouth piece to use the open-circuit and start a safe ascent.

This is part three of a four-part series on PADI’s new specialty diving certifications.

Phuket Lifestyle: The race that stops a nation