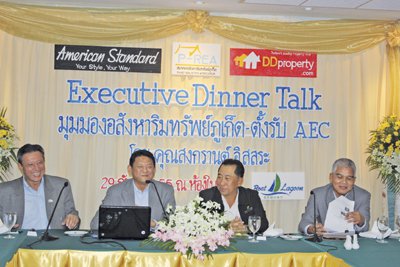 PHUKET: The island’s property market continues to grow with a high number of new apartments, condominiums and small hotels in line for approval.

This “rising boom” sets the stage for the AEC (ASEAN Economic Community), which will come into effect in 2015.

Mr Songkran shared his outlook for the property sector in 2013 as well as views on the AEC.

Mr Songkran also talked about how Phuket’s tourism has thrived, and how the island’s property and tourism sectors complement each other; when tourism is good, the property business will follow, he said.

However, he noted such benefits will only be short lived, and that both the government and private sectors need to understand the importance of other factors, such as safety.

If a problem occurs, it will have immediate, negative impacts, especially in today’s ‘age of online’ in which negative news travels fast.

He talked about the need to keep tourism sites clean and orderly, l as well as looking after natural resources, which are important selling points.

He also stressed the need to improve on conveniences by developing infrastructure projects, namely in transportation.

He suggested that an increasing demand for boat berths, ports and marinas would prove to be another huge source of revenue for the province.

Moreover, he highlighted the importance of developing Phuket airport to a higher standard; building a large conference hall; and various other tourism promotional activities.

Mr Tanan, speaking as Head Consultant for the PREA, said that with the advent of the AEC, locals shouldn’t be too concerned with investors from other countries, as investors from Bangkok are expected to be a greater threat to market stability.

He forecast that in two years Phuket will have over 7,000 condominium units, a considerable amount, given that in 1989, when the island experienced its first condo boom, there were less than a hundred units on the market. In the past 3-4 years there have been 800 to 1,000 new units built.

From the start of 2012 through to August, applications for an additional 1,200 condo units have been submitted.

In two years time, he estimates that there will be as many as 3,000 applications submitted annually, growth leap equivalent to 300%.

Aside from this, he said that AEC will have major implications for the house and apartment rental sector, as well as small hotels.

Since the marketing strategies of new property developers tend to offer payment conditions with many ‘hard-to-resist’ incentives, flocks of buyers, most of whom are looking to turn a profit, have been lured into the market.

Mr Thanusak agreed and built on Mr Tanan’s points. He stressed that the high demand we are seeing is not necessarily reflecting the “real market” like in the past, but is increasingly being driven by speculative investment.

Therefore, he warned developers to be careful and to do proper marketing research before launching projects. He stressed that Phuket’s property growth will be relevant to its tourism growth, and that the AEC will thus enhance the market. Therefore, we should be prepared to employ the best defense and offense, he said.