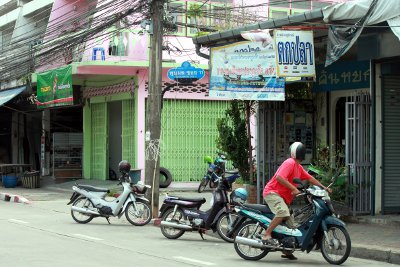 PHUKET: The off-duty cop who shot a man dead in Phuket Town on May 5 has been granted bail.

Though some details about the case have come to light, the exact cause of the argument that led Cpl Rachaporn Semaksorn to shoot Eakkasit Sangangam in the head ,on Phun Pol Soi 11 in Phuket Town, is still unclear.

“The shooting wasn’t over a woman; it was caused by a heated argument over something else,” Deputy Superintendent Jumroon Plaiduang told the Phuket Gazette.

“They both [Cpl Rachaporn and his brother Dechaporn] saw Mr Eakkasit sitting on his parked motorbike. They attempted to stare him down, and then the three of them got into an argument.

“They all are still young and impetuous, so when they get angry they cannot control themselves,” said Lt Col Jumroon.

Col Jumroon confirmed to the Gazette that the police were collecting evidence and conducting a forensic inspection of the gunshot residue. Once finished, the case will be sent to the prosecutor.

The Gazette contacted the Phuket Provincial Court and was informed that the brothers had been released on bail, but the court officer declined to give any further information.