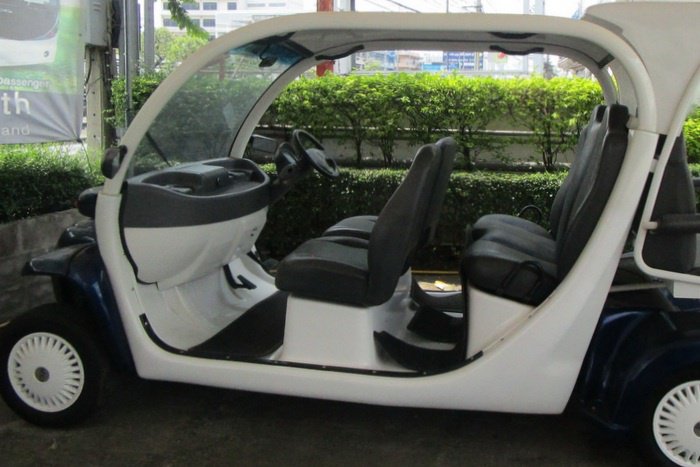 PHUKET: The numerous luxury resorts in Phuket has helped grow Southern Thailand’s golf cart and other neighborhood electric vehicle (NEV) market, which is now in a dead heat with the Central Region, Ekasit Kunanantakul, managing director of Global Electric Motorcars Asia Company, said in
an exclusive interview with the Phuket Gazette.

Global Electric Motorcars, now 12 years old, was among the first to sell golf carts to posh resorts and hotels, and has also seen sales of these vehicles increase in the Northeast since the end of last year.

“Chiang Mai and Mae Fah Luang universities have electric shuttle buses running in their campuses now. These are 14-seaters and have to work hard moving students from place to place… [the universities’] expenses have dropped by 50% just by not using petrol,” Mr Ekasit said.

However, while Global Electric Motorcars distributes various types of NEVs throughout the country, it only has two showroom-cum-service centers outside Bangkok. One of which is on Phuket’s Thepkrasattri Road and the other in Hua Hin.

Even so, the size of the market in the South has resulted in a plan to open another one on Koh Samui, but Phuket remains key.

“We have lots of clients in Phuket because there are so many hotels and resorts on the island. We want to have the service center there so that buyers are confident that their vehicles will be serviced punctually and that they will not have to dash to Bangkok to get this done,” Mr Ekasit explained.

Mr Ekasit mentioned that the lifespan of a NEV is more than 10 years, but the battery has to be changed every three years.

“But these batteries are not expensive, they are not like the lithium variety installed in fast, air-conditioned cars,” he said.

Very little fitting is done in Thailand to the electric golf carts, which the company imports from various countries including the United States, Europe, Japan, China and Taiwan.

It is not worthwhile assembling kits here, as cost-conscious buyers can always opt for the cheaper Chinese models on which zero tax applies, which is significantly less than the 40-50% that is added on to the price tag of those being imported from other countries.

“Nowadays, the quality doesn’t differ substantially, and we only have to select a good factory – there are a lot of factories in China, but only 10% are quality plants, so you do have to choose carefully.

Global Electric Motorcars is also pushing for the licensing of NEVs to run on main roads, as medium-speed ones are now allowed to do so in the United States.

“Thailand allows the licensing of higher-specification electric vehicles, but not those of our size,” Mr Ekasit explained.

What is becoming increasingly popular, however, is electric brush cutters, which Global Electric Motorcars imports from Japan. Buyers have the choice between two-wheeled and four-wheeled vehicles. Prices range from 220,000 to 300,000 baht.

“It depends on the region. In the Northeast and national parks like Khao Yai, brush cutters sell well, but in Phuket, it’s golf carts,” Mr Ekasit said.