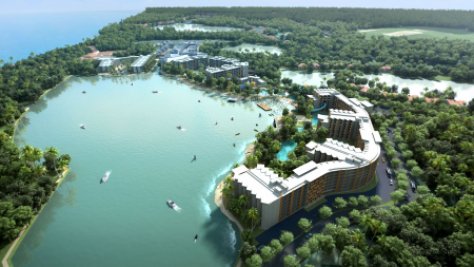 PHUKET: A lavish dinner to celebrate the 25th anniversary of Laguna Phuket was held on Friday, where Chief Executive of Laguna Resorts & Hotels Ho Kwon Ping (known as KP Ho) gave a preview of upcoming expansion plans for the group.

A new mixed-use development overlooking a west-coast beachfront lagoon between the Dusit Thani Resort and upcoming Outrigger Laguna Beach Resort will include a hotel, luxury condominiums, a water park and space for over 1,000 retail shops and restaurants.

The buildings will be situated among a series of waterways which will offer upscale shopping and walkways at ground level. The existing Canal Village retail area will be fully redeveloped.

One key focus of the plan includes a large scale tourist attraction which will be anchored as an international standard water park.

Laguna Phuket is looking to unlock its vast land bank during the next five years, and there would appear to be further property news coming in the near future.

More information on this development and an interview with Chief Executive KP Ho are featured in this week’s Phuket Gazette, out on the streets across the island at noon today.