PHUKET: Phuket’s burgeoning events scene received a boost this week with the announcement that leading food supplier Jagota Brothers has signed an agreement with Events International [EI], organizer and promoter of the Phuket Gazette’s series of “Headline Events”, to sponsor three upcoming musical and theatrical performances on the island.

The agreement will see Jagota as the title sponsor for these colorful performances, each with imported talent, which will include comedy theater, a Bollywood party night, and a Snow White and the Seven Dwarfs musical.

Anand Jagota, CEO of Jagota Thailand, said the company was proud to be associated with these events, which are designed to increase the amount of imported live music and theater available to the island’s international community.

“Jagota has had a strong presence in Phuket’s hospitality industry for many years now and this agreement underscores our continued commitment to support the community across a range of entertainment areas,” he said. 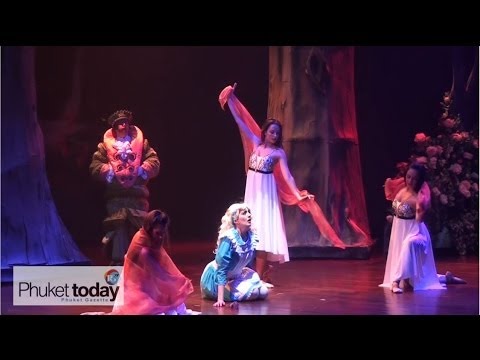 A previous Gazette Headline Event organized by Events International was a production of Alice in Wonderland at the Simon Star Theater in Phuket Town. Video: PGTV

EI is the company behind the recent ABBA and Beatles tribute band concerts, as well as the popular Alice in Wonderland performances in Phuket Town late last year.

EI’s Managing Director Vikram Singh and his partner Sonu Kapoor say they are passionate about bringing more world-class entertainment to the island and that the support of Jagota is a key step in
the journey.

“Each show we have organized has demonstrated the thirst here in Phuket for quality imported talent, both musical and theatrical, and for both adults and children,” said Mr Singh.

“We are thrilled to have Jagota on board as title sponsor for our next three events, and we hope to continue our relationship into the future, as we bring even more fantastic events to the Phuket,” added Mrs Kapoor.

And Phuket Gazette Events Manager Kanjana “Jane” Sriboonsom notes with pride that the strong partnership between the Gazette and EI has been further strengthened by the support of Jagota.

“As Phuket’s leading media company, we can provide the platforms necessary to successfully promote these great international events here, and having Jagota on board in such a major way as title sponsor underlines the fact that the market for high-quality entertainment in Phuket is growing rapidly,” she said.

Dates for the next three Gazette “Headline Events” have been confirmed as follows:

Boeing Boeing – A laugh-out-loud comedy is coming to Phuket on May 3. Photo: Supplied

May 3: Boeing Boeing – A laugh-out-loud comedy
The outrageous story of a swinging bachelor in a love affair with three stewardesses at the same time. Their flights are expected to land at different times, but as luck would have it, the three muses of his life touch down at the same time! It’s hilarious. Don’t miss the fun. Cast and crew direct from London.

May 31: Bollywood Party Night
A popular DJ from India is flying in, along with some dazzling Bollywood dancers. Watch, learn and groove with them – the Indian way! The night will feature an eclectic mix of Bollywood, hip hop, funk, house, and soul music… and thumping bass and drum beats.

Get ready to move your hips the Bollywood way! To spice it up even further, there will be a delectable blend of Indian grills, curries and assorted breads. It’s a Bollywood affair, so dress up accordingly and breathe in the colorful spirit of India.

June 7-8: Snow White and the Seven Dwarfs
It’s time to wrap up the season with a family musical at Phuket’s Simon Star Theater. Children, parents and grandparents can get together for a fun, family time with festivity all around.

A great visual treat with dances and music, and the children can even have their picture taken with their favorite character! Get ready for a rendezvous with Snow White, the Prince and the Dwarfs at Central Festival for a sneak preview before the show!