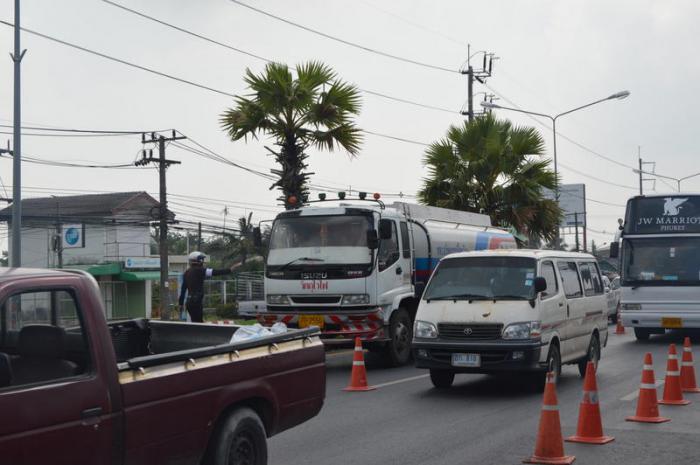 PHUKET: The nationwide Seven Days of Danger road-safety campaign for the Songkran holiday came into effect at midnight last night, and the Department of Disaster Prevention and Mitigation Phuket office (DDPM-Phuket) has confirmed there have been no deaths reported in the first 12 hours of the campaign.

“The Seven Days of Danger campaign started at midnight and will run from today until midnight April 18,” DDPM-Phuket officer Preeyaporn Torwong explained.

“As of midday today, no road deaths had been reported on the island.”

“As we all know, Songkran is the Thai New Year. Most Thai people journey home to visit family, so the roads will be busy and accidents are more likely to happen,” Col Peerayuth said.

“Officials have already started checking on motorists, including breath testing those suspected of drinking and driving.”

Col Peerayuth stressed that alcohol is prohibited in water play zones during the holiday.

“Please note that alcohol is banned in water play zones. Anyone drinking while driving, even a passenger, will be charged under the Alcohol Act. Everyone needs to be careful, especially motorists,” he said.

“Anyone who is a public nuisance or endangers public safety will face up to six months in jail, a fine of 10,000 baht, or both.

“Police will be monitoring the roads and watching out for people’s safety so that everyone can have fun during the holiday. Happy Songkran.”

Officials have set up checkpoints throughout the island to ensure road safety and announced “do’s” and “don’ts” of the Songkran Festival on Wednesday (story here).